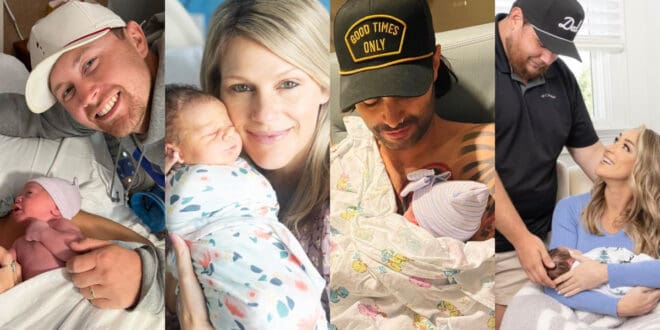 In addition to welcoming children this year, several country stars also announced that they are expecting.

See a full list of all the country stars who welcomed children in 2022 below.

The “Damn Strait” announced his son’s birth on Tuesday (Oct. 25) via Instagram. At the time, McCreery shared a series of five photos, including a photo of baby Merrick in his bassinet and photos of McCreery and his wife with their precious new bundle of joy.

“Never known a love like this,” McCreery wrote. “Merrick Avery McCreery joined us 11 days early on October 24th at 4:34am! 7 lbs 13oz of nothin but love! Thank y’all for all of your prayers during this exciting season of life! Healthy baby and a healthy mama! Praise God.”

“Welp he decided that Fathers Day would be a good time to show up. I couldn’t agree more. Me and @nicolejcombs are over the moon in love with this little guy,” he wrote at the time alongside their first family photo in the baby’s nursery. “Mama and baby are healthy and we’re back home now with family. Life is good. Everyone welcome Tex Lawrence Combs to the world!”

Nicole also shared the news of their son’s birth with her followers. “It’s going to be hard to top this past Father’s Day,” she wrote. “Welcome to the world, Tex Lawrence Combs. You are the best chillest angel boy and I’m so happy I was chosen to be your mom. These are the days 🤍”

“It’s a GIRL!!!!!!!!!!!! Georgia Grace Coleman came into this world at 12:08am two weeks ago today on September 25th 👼🏼 Stella June, Lillie Mae and Arlo are absolutely, deliriously in love with her along with @colemantime and myself,” Williams wrote on social media. “She is a dream come true, and she brings the most beautiful light and tenderness with her in the room wherever she goes. From the hospital to our home, she has filled these spaces up with deep awe and joy. I’m eternally grateful, and can’t wait to share more of her precious moments ❤️❤️❤️”

“Lily Anne Moon is here y’all! 💛” Moon wrote on Instagram to announce the news of his daughter’s birth alongside an adorable photo of himself holding his precious new bundle of joy.

Randy Houser and his wife Tatiana took to social media on October 19 to reveal the news of the arrival of their second child, a son named Harlan “Banks” Houser. The couple welcomed their son on September 21, 2022.

“Answered prayers and hearts so full 🙏🏼,” Houser wrote on social media. “We have spent the past 4 weeks soaking up every minute of family time with baby Banks. Thank you Lord for this sweet boy!!”

On June 7, 2022, Sam Hunt shocked fans when he revealed that he welcomed his first child with wife Hannah Lee Fowler during his headlining performance at Star’s For Second Harvest in Nashville at The Ryman Auditorium.

“I recently had a baby girl named Lucy Lu,” he told the audience. While it’s unclear when Lucy Lou made her arrival, Hunt told the audience at the time that he and Lee Fowler welcomed her “a couple of weeks ago” and that she’s already had a profound impact on his life.

“I think being out here in the music business and being out on the road is sort of hard on my heart,” Hunt told the crowd. “My heart definitely a lot harder some days since I left that small town, but it’s amazing how that little girl melted that all away overnight a couple of weeks ago. I’ve been filled with a lot of gratitude these past couple of weeks and I just want to say up here on The Ryman stage how grateful I am to have been a part of Country music for the last ten years.”

#SamHunt revealed that he welcomed his first child with wife Hannah Lee Fowler a couple of weeks ago.

Jake Hoot became a father of two in 2022 when he and his wife Brittney Hoyt Hoot welcomed their daughter, Madilyn Bri Hoot. Madilyn Bri joined sister Macy, Jake’s daughter from a previous relationship.

On Sunday, July 31, the season 17 winner of NBC’s The Voice took to social media to announce the exciting news that he and his wife Brittney have welcomed their first child together.

“Well we did a thang last week! World, meet little Miss Madilyn Bri. We couldn’t be more in love 😍,” Hoot captioned the adorable photo, alongside the hashtags #girldad #ladiesman #mybaby #ilovemygirls. Madilyn made her grand entrance into the world at 3:30 am, weighing 7 lb, 4 oz and measuring 18 ¾ long upon arrival.

Hoot’s wife Brittney Nicole Hoot also shared the news about their new bundle of joy on Instagram at the time.

“She’s the most beautiful thing I’ve ever known. I never knew that my capacity to love someone could become so deep, and this profound. Everyone meet our little angel. She’s more than we ever dreamt of. We love you so much our little angel and can’t believe we get to love you forever!”

Chase Wright and his girlfriend Brittany Norris welcomed their first son together, Ashur Lee Wright, on Monday, November 21 at 5:20 AM.

“I knew when I met [girlfriend] Brittany [Norris] that she was special, and I couldn’t imagine living life with anyone else,” Wright exclusively told PEOPLE. “We both knew shortly after officially dating that one day we wanted to grow the family we were building. Neither of us knew exactly when that would be, but God had a plan for us the entire time. Brittany had already had her first child, Eden, when we first met. Initially, she thought that already having a child would scare me away, but it really only excited me to get to know her more. Being a father is something I’ve looked forward to for a very long time, and I was excited to fit into that parental role with her as our relationship grew.”

After being hospitalized over a month due to pregnancy complications, Maddie & Tae’s Taylor Dye Kerr has welcomed her first child with husband Josh Kerr. Arriving several weeks earlier than expected, their daughter, Leighton Grace Kerr, was born at 2:42 p.m. on Monday, January 17, weighing in at 2 lbs, 5 oz.

Taylor took to Instagram to share the news on Thursday, January 20, 2022. “She’s beautiful, strong and everything we have ever dreamed of,” Dye wrote on Instagram at the time of the birth. ”She decided to be a Capricorn like her daddy. We already can’t wait for the day we get to finally take her home 💜”

Jennifer Wayne, who is one part of the trio Runaway June, and her husband Austin Moody welcomed their first child, a daughter named Lily Maria, on April 18, 2022. The married couple took to social media days later on Friday, April 22 to share the news of their new bundle of joy’s arrival with fans.

“Ecaped[sic] from the womb! Wanted for stealing mine and @jenniferwayne hearts. Goes by the name of Lily Maria Moody ❤️,” Moody wrote at the time on Instagram. “Everyone is happy and healthy, thankful for our new addition 😎”

“Pick Me Up” singer Gabby Barrett and her husband Cade Foehner welcomed their second child, a son named Augustine Boone Foehner, on October 27, 2022. The American Idol alums took to social media to reveal the exciting news that their new bundle of joy arrived via a joint post.

“Soaking up the newborn days with baby brother. What a precious gift from our Lord!” the couple wrote. “Augustine Boone Foehner 10.27.22 💙 (Pronounced UH-GUS-TIN).”

Augustine Boone joins 1-year-old sister Baylah May, who was born on January 18, 2021.

“🤍 Baker Weston Lane 🤍. Our little man surprised us 9 days early, late Sunday night,” Lauren wrote. “Still laughing thinking about my water breaking (very aggressive, movie like situation), driving myself to the hospital in Chris’ truck (pantsless btw) because my car was out of gas and Dutton was sleeping 😵‍💫. Very chaotic, unplanned and panicked, but the minute he came into this world, he’s been nothing but peaceful and perfect. We love you Baker, welcome to the 🌍!”

Two days after welcoming Baker Weston, The Lanes introduced their eldest son, Dutton Walker Lane, to his baby brother for the first time. 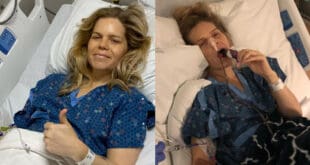 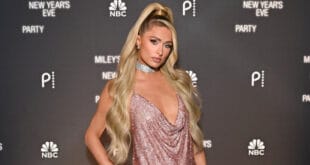