The “I Hope” singer and Foehner shared a joint post to social media on Wednesday (Nov. 2) to share the exciting news of their new addition with fans.

“Soaking up the newborn days with baby brother. What a precious gift from our Lord!” the couple wrote. “Augustine Boone Foehner 10.27.22 💙 (Pronounced UH-GUS-TIN)”

The couple first revealed the news that they were expecting their second child on Mother’s Day (May 8) by sharing a photo of an ultrasound on social media.

Another LIFE we get to love and cherish. Happy Mother’s Day,” Barrett shared at the time.

Foehner also revealed the news at the time with a heartfelt post.

“Happy Mother’s Day to my amazing, strong, and fruitful Bride! @gabbybarrett_” Foehner wrote. ”She is currently carrying another precious life made in the image of God. A son to bear our name into the next generation. Our children will rise up and call her blessed, this husband also, praises her. Proverbs 31:28 ‘Praise God from whom all blessings flow!’”

This is the couple’s second child, following the birth of their daughter, Baylah May, in January of 2021.

Barrett has been vocal about her desire to have a bigger family since the arrival of Baylah May.

“We’re ready to add on to our family and get some babies in there,” the “I Hope” singer recently shared. “I definitely want to have more than one in the future, for sure.”

In 2018, Barrett and Foehner met when they both appeared on Season 16 of American Idol. Their relationship continued to flourish and Foehner proposed in March of 2019.

Following a short engagement, the pair tied the knot on October 5, 2019, during a small wedding in Garrison, Texas.

Foehner has also inspired several tracks on Barrett’s record-breaking debut album, Goldmine, including her chart-topping single, “The Good Ones.” Most recently, Foehner appeared in Barrett’s just-released music video for her latest single, “Pick Me Up.”

Additionally, the country superstar and chart-topping hitmaker is currently working on her second studio album, which will follow Goldmine.

“We’ve been focusing on [my new album] a lot throughout the summer and planning for that before going on maternity leave, so as soon as I’m done touring this weekend, in September, we’re going to be doing a lot of recording,” Barrett shared with the Pittsburgh Post-Gazette. “We should have a lot of the second album done by the end of next month. That’s something to look forward to.”

Barrett recently teased fans with a snippet of a new song from the upcoming sophomore project.

Next year, Barrett will return to the road as a special guest on Kane Brown’s headlining tour, dubbed the Drunk or Dreaming Tour. The trek, which also features Dustin Lynch and LoCash, begins on March 16 in Grand Rapids, Michigan, and ends on June 10 with a show in Greenwood Village, Colorado. 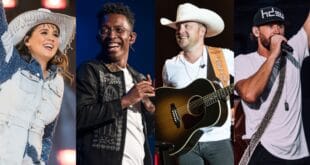 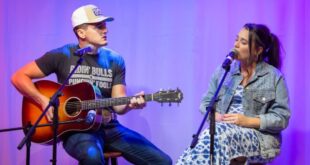 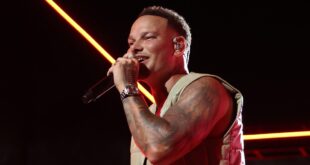