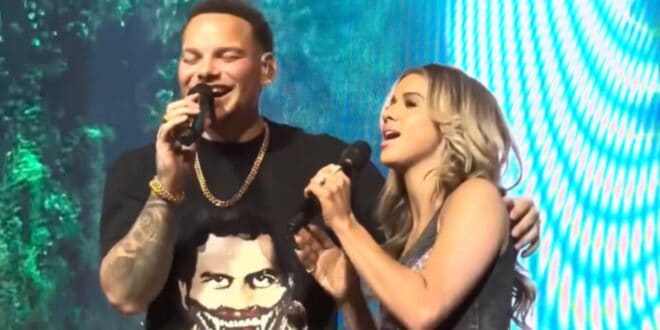 Kane Brown and his wife Katelyn Brown celebrated a milestone moment together in Canada. The couple performed their chart-climbing collaboration together for the first-time ever.

On Thursday (Dec. 1), Brown brought The Drunk or Dreaming Tour to Canadian Tire Centre in Ottawa, Canada and during his headlining set he brought out his wife to deliver the live debut of their duet, “Thank God.”

Kane took to social media after the show to share a clip of their performance together and gush over his wife’s incredible performance.

“My baby’s first time on stage singing our song together ❤️ she killed it of course and I’m so proud of you!!!! (Thank god)!!!!!” Kane captioned the clip. “Ottawa Canada y’all slayed 🔥”

In the video, Kane and Katelyn are seen on stage in front of a massive audience singing “Thank God” together.

The clip begins with Kane and Katelyn flawlessly harmonizing together before Katelyn takes on her verse, which was met with a warm welcome and the approval of a roaring applause as she shocked fans with her impressive vocals. Kane was all smiles as he admired his wife living out her musical dreams on stage in front of a massive crowd.

“Never thought I’d find an angel undercover / Who made a change to everything / From my heart to my last name / Hey, hard to tell When he fell / That boy was Heaven sent / And every night When I close my eyes / Before I say amen,” Katelyn belted out, putting her powerhouse vocals on full display.

Watch Kane Brown and Katelyn Brown perform “Thank God” together for the first-time ever below.

“Thank God” was written by Josh Hoge, Jaxson Free, Kyle Fishman, Christian Davis, and Jared Mullins. The tune made a major impact at country radio when it hit the airwaves on Monday (Sept. 12), earning a whopping 68 first-week adds on stations around the country.

“So me and Kate have been trying to release a song for like five years now,” Brown previously explained of the duet. “And we kept getting songs coming in, we thought that you know, each of them was the song for us but it never felt right. So my buddy Josh, that’s signed to my publishing deal, he sent me a song called ‘Thank God’ and I listened to it and I fell in love with it. And then kept listening to it and kept listening to it.”

Brown decided it should be a duet and the rest is history. “So I asked Kate and Kate fell in love with the song and now it’s one of my favorite songs,” he added.

“Thank God” appears on Brown’s just-released third studio album, Different Man, which features 17 tracks, including the chart-topping hits “Like I Love Country Music” and “One Mississippi.”

Kane and Katelyn brought the song to life with a romantic music video, filmed in Hawaii by Brown’s longtime collaborator, Alex Alvga.

The clip follows the couple around the Aloha State as they cruise down a picturesque road in a vintage Bronco with the top down, enjoy a walk through a luscious tropical rain forest, and escape the world together in a mountainside bungalow.

The video concludes with the couple embracing on a beach as the sun sets around them, making for a stunning romantic moment.

While the beloved country couple have shared numerous videos in the past singing covers together, “Thank God” marks the couple’s first official duet together. However, this duet doesn’t seem to be their last as fans are loving the tune and it is quickly climbing up the charts at Country radio.

During a recent interview with E! News, Kane revealed that he and his wife will “definitely” be returning to the studio to record and release another duet in the future.

“There will definitely be another song with us in the future,” the 29-year-old hitmaker promised fans. “We’re gonna write another song and release it. We just want it to be better than this one.”

READ: How Did Kane Brown Meet His Wife Katelyn?

While Katelyn’s vocal chops may come as a surprise to some fans, she is no stranger to making music. In fact, when Katelyn first met Kane, she was pursuing a career as a solo R&B/Pop singer. Music is what brought them together in the first place as Kane was cast to be in Katelyn’s music video, but couldn’t fulfill the appearance due to a show.

In a 2020 interview with RADIO.com’s Kelly Ford, Kane shared the story about his first time meeting Katelyn.

“We met down in Florida at my very first show ever, I believe it was in 2015. The day before that show, I was supposed to be in her music video because she was an artist as well, and it couldn’t happen cause my show was the same day as the music video,” he recalled.

“So a year goes by and the same guy we were working with brings her to a show, she didn’t want to come and he forced her basically. We met, we didn’t talk at all, I maybe said hey to her but I thought she was adorable and I kept looking at her all night. So I asked her to come to Nashville like the next day, I flew her down and we just hit it off and she never left.”

While “Thank God” is poised to bring a lot of attention to Katelyn, don’t expect her to start pursuing a solo career.

“She doesn’t want to be an artist — she just loves singing,” Brown recently told Billboard. “She’s always singing around the house and her voice is beautiful. We’ve been looking for songs and probably went through about five of them before we got this one from one of my writers at [publishing company] Verse 2 and it was supposed to be a solo song. We changed it to a duet, and she fell in love with this song. Personally, I think it is the biggest song off the record.”

Brown is currently touring overseas on the international leg of his Drunk or Dreaming Tour and will soon return to the United States for his recently announced 24-date U.S. leg of the trek, which kicks off on March 16 in Grand Rapids, Michigan. The U.S. leg of the tour features special guests Dustin Lynch, Gabby Barrett, and LoCash on select dates. 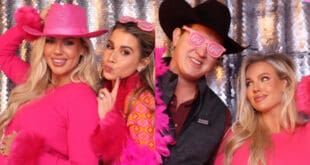 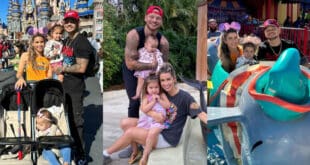 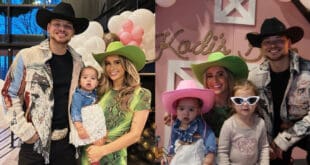