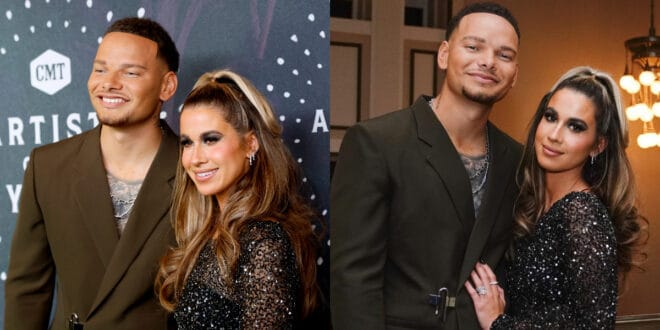 Kane Brown and his wife, Katelyn Jae Brown, recently went on a date night – but not just any date night – the cute couple celebrated their four-year wedding anniversary in Nashville at the Schermerhorn Symphony Center.

Brown and Katelyn, who share two kids, 2-year-old Kingsley and 9-month-old Kodi, together, walked the black (red) carpet without their sweet babies in tow. For the star-studded event, they appeared dressed to the nines. The “Grand” singer was seen wearing a suit jacket paired with a chained-necklace while Katelyn dazzled in a sheer deep blue ensemble, matching her smoky eye shadow.

“We’re having so much fun! This is like our date night tonight for our anniversary,” Katelyn told Entertainment Tonight’s Cassie DiLaura.

“We woke up with kiddos,” Brown said before Katelyn added. “Spent [the morning] with the kids, hanging out, and then – and so we had to start glam in the afternoon. But really just a regular day!”

Brown and Katelyn’s recent outing comes after the release of their first-ever collaboration, “Thank God.”

The ballad, which belongs on Brown’s Different Man album, was the most-added single at country radio the week following its release, with a total of 68 adds.

“Thank you, country radio 💪🏾🔥,” Brown posted via Instagram, sharing a graphic of the radio stations that included the song in their daily rotation.

But for the CMT’s 2022 Artist of the Year, Brown’s wife was in attendance to support her handsome hubs, as he is one of the honorees at the event. This year marks the third time Brown has been recognized as an Artist of the Year. And, for him, that feat doesn’t go unnoticed.

“It feels great just to be recognized. I love it. CMT has always been good to me. So I’m blessed to be here,” Brown shared.

And the celebrations keep on coming. After mingling at CMT’s 2022 Artist of the Year, Brown and Katelyn made sure to pay a special tribute to each other on their respective social media pages.

Brown shared an image of the pair striking a pose for the cameras while at the Schermerhorn Symphony Center.

“Happy anniversary, and Thank God I found you ❤️ the best mama to our girls and wifey I could ask for 😘,” he captioned – referencing the couple’s duet.

Katelyn followed suit, uploading an image of the pair at the venue. Her photo shows the pair gazing into each other’s eyes with big smiles spread across their faces.

“Happy Anniversary, I love you more and more every day ❤️,” she captioned the photo.

Brown and Katelyn first met in 2016 at a concert in Florida. After hitting it off, they got engaged a year later. On October 12, 2018, they tied the knot in a stunning ceremony near Nashville with 200 of their closest family and friends watching as they said their “I Do’s.”

The 2022 CMT Artists of The Year event will air later this month. Aside from Brown, Johnson, Combs, Pearce, Hayes, Wilson, and Jackson will be celebrated during the broadcast. Performers include Jackson, Pearce, Johnson, Brown and Wilson. Walker Hayes, Ciara and Riley Green will also take the stage for a collaboration honoring Combs. Meanwhile, Chris Stapleton, Dan + Shay, Dustin Lynch, Rascal Flatts Gary LeVox, Kelsea Ballerini, Kelsey Asbille and Shane McAnally will be presenting awards to recipients. The 2022 CMT Artists of The Year will air on Friday, October 14, at 9p/8c on CMT.