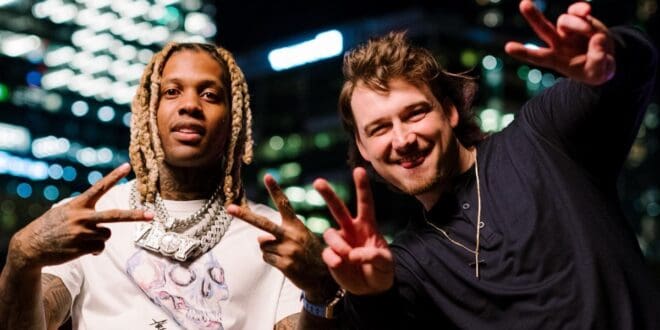 On Friday (Dec. 17), the East Tennessee native finally dropped the highly-anticipated track, which details a night out in Downtown Nashville with a girl that he met at “Aldeans,” a SoBro bar owned by fellow country star, Jason Aldean.

The bar name-drop in the song comes after the singer/songwriter made several surprise appearances earlier this year at the four-level eatery, saloon and rooftop bar in Music City, dubbed Jason Aldean’s Kitchen + Rooftop Bar.

Sonically, the song is different from anything we’ve ever heard from Wallen. While maintaining his signature deep southern twang, the superstar pushed his musical boundaries further than ever before by incorporating hip-hop elements for a fresh new sound.

Wallen and Lil Durk blend their voices together flawlessly while traded verses throughout the fan-favorite track.

“I met her down at Aldean’s / she said she that saw me walking in about a mile away / Bean had to take her phone and that just took her smile away / she said I’m too drunk and crazy she don’t like the way I dance / I said you don’t have to join in / she said she’d take a chance / I’ve been kind of crazy since it went down / I get kind lost and this is what I found / girls like you just want to take me around, around and around / there’s two things that you’re going to find out / they don’t love you, and they only love you right now / if I was smarter I would’ve stayed my ass at home and leave them Broadway girls alone / Broadway girls alone / Broadway girls alone…”

Listen to the new song below.

The collaboration did not come as a surprise to fans, as Lil Durk gave Wallen his stamp of approval by commenting on the chart-topping hitmaker’s teaser clip, released in early October. When the teaser of “Broadway Girls” appeared on social media, the anthemic tune instantly took the internet by storm as fans begged for its release.

While Wallen did not confirm the tune’s release date at the time, the multi-platinum artist spoke out about the upbeat banger earlier this week during an interview with his longtime friend ERNEST, on the Just Being ERNEST podcast.

During the podcast, the “Sand In My Boots” singer told the host, who is his Big Loud labelmate, that he doesn’t “know what’s going to happen with [the song], but… there [are] a few options.” He then went on to share that he may even leak the song or “it might end up on somebody’s album,” but didn’t confirm whose or when the track would be released.

The world-renowned musician not only name-dropped a bar that he previously frequented, but during the interview with ERNEST, he revealed that he also gave a nod to his cousin Andrew Greene, who goes by Bean.

“Shoutout Andrew Greene, dude, string bean, if you guys hear that in ‘Broadway Girls,’ when it comes out, that’s who we’re talking about,” Wallen said. The shout-out to Greene is during the chorus when Wallen sings, “Bean had to take her phone and that just took her smile away…”

A music video for the song seems to also be in the works, as several clips have appeared throughout social media on Wednesday (Dec. 15) of Wallen and Lil Durk filming on Lower Broadway in Downtown Nashville.

The clips that surfaced online features the pair shooting the music video in the wee hours of the morning when the popular hangout spot is closed and clear of country music fans.

Below are a few clips seen on TikTok of the video shoot.

“Broadway Girls” follows the release of Wallen’s “Goin’ Nowhere” collaboration with HARDY and Foo Fighters’ Chris Shiflett on Hixtape Vol. 2. The singer is gearing up to release another duet called “Flower Shops” with his longtime friend and collaborator ERNEST on December 31.

The song’s release comes just hours after the news broke that Wallen donated $20,000 worth of toys, clothes and more to 200 underprivileged children. Additionally, Morgan Wallen’s sophomore project, Dangerous: The Double Album, closed out the year as the best-selling album of any genre.

In 2022, Wallen will embark on his 54-date The Dangerous Tour, which is sold out in many markets and will feature support from HARDY and Larry Fleet. 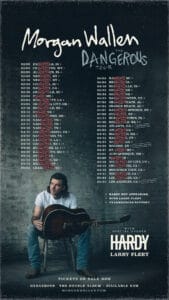