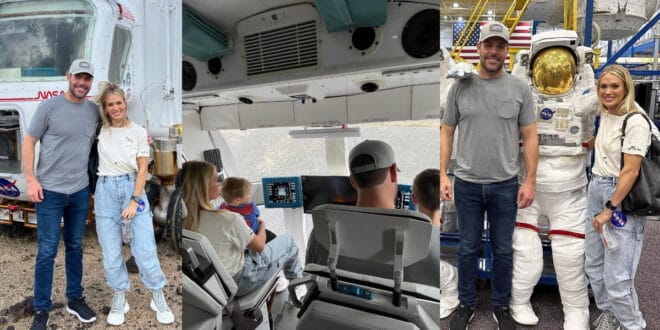 Carrie Underwood, her husband Mike Fisher and their two sons, Isaiah and Jacob, had the “best day” at the NASA Johnson Space Center in Houston, Texas.

On Friday (Nov. 4), the country superstar had a day off from her headlining Denim & Rhinestones tour and she and her family went to check out NASA in Space City, just one day after performing at the Toyota Center in downtown Houston.

“Had the best day @nasa talking to astronauts in space, driving moon rovers, checking out space station replicas and meeting some really cool people!” Underwood wrote before thanking NASA Astronaut Shane Kimbrough, who gave her and her family a tour of the facilities.

“Thanks to @astro_kimbrough and everyone there for showing us around and being so sweet to my boys (who may just end up being future astronauts)!!! #Houston #Space #BeamMeUp,” Underwood added.

Underwood shared a series of ten photos from their day at the NASA Space Center. The photos included images of her and her husband posing in front of a space vehicle (a moon rover), standing with an astronaut and two space suits, visiting the Mission Control Center and more.

The “Hate My Heart” singer also shared snapshots with her two sons sitting on her and Fisher’s lap in a space vehicle and them chatting with real-life astronauts in Space.

Last month, Underwood’s husband and their two kids attended opening night of her tour and cheered her on from the sold-out audience.

Underwood took to social media a few days after the show to share a clip of an adorable moment that she shared with her sons during the show. In the video, Fisher is seen holding their two boys on his lap as the “Ghost Story” singer soared overhead on a swing as she made her way to the B-stage. Her son, Isaiah, is seen in the clip waving to his famous mother and blowing her kisses, while Jacob was sound asleep on the former NHL player’s lap.

“One was blowing me kisses…one was sleeping soundly,” Underwood wrote on the clip.

The video was captioned, “My sweet boys came to see their mommy’s first show! Jakey caught a few songs, at least, before he drifted off to dream land…”

Fisher also took to his Instagram to share a few photos of the visually-stunning and jaw-dropping moments that took place during his wife’s first show on the Denim & Rhinestones Tour.

Proud of you @carrieunderwood!” Fisher wrote alongside a series of photos, before adding, “The boys and I were in awe of the show!!”

During a recent interview with TODAY Show, Underwood was asked if her kids realize that she is a world-renowned singer.

Underwood also told Extra that her kids will join her on the road on and off for this tour, but that they will remain at home for the most part.

“Well [on] this tour, I think for the most part, they’ll be home,” Underwood told Extra host Alecia Davis. “On the last tour, we set up a playroom in the venues that had, you know, crayons and paint, some toys and things like that. They would kind of have their own little space to get away. On my last tour, my youngest son was three-months-old when we were on the road. So he was just a little nugget, you know?”

Carrie Underwood is currently in the midst of her wildly successful Denim & Rhinestones tour, which kicked off on Saturday, October 15 in Greenville, South Carolina, and currently runs through March 17 in Seattle, Washington.

Produced by AEG Presents, the 43-city trek features Jimmie Allen and is scheduled to run through March 17, 2023.

“I felt like he made sense. He embodies denim & rhinestones almost as much as I did,” Underwood told Lon Helton of Allen during a recent interview on the Country Countdown USA. ”At least we know we will have a lot of bling and plenty of rhinestones for wardrobe,” she shared, reasoning Allen’s sense of style as part of why she chose to have him on the bill. “We may even get together on stage. It’s always a shame, if I was to have somebody like him out, it would be a shame not to get to sing with him while we’re on stage.”

The Oklahoma native will donate $1 from each ticket sold to the Tunnel to Towers Foundation (t2t.org), which has been helping America’s heroes since 9/11 by providing mortgage-free homes to Gold Star and fallen first responder families with young children and by building custom-designed smart homes for catastrophically injured veterans and first responders. The Foundation is also committed to eradicating veteran homelessness and aiding the victims of major U.S. disasters.

Tickets for the Denim & Rhinestones Tour are on sale now HERE.

The massive outing comes in support of her latest album, Denim & Rhinestones, which arrived on June 10 and features her current single “Hate My Heart,” “Ghost Story” as well as fan favorite tracks like “Pink Champagne,” “Crazy Angels,” and “Velvet Heartbreak.”

Previous WATCH: Carrie Underwood Shows Off Her Wild Side During Girls’ Night Out In “Hate My Heart” Music Video
Next P!NK Transforms Grocery Store Into A Disco Dance Party In Music Video For Lively New Single “Never Gonna Not Dance Again”