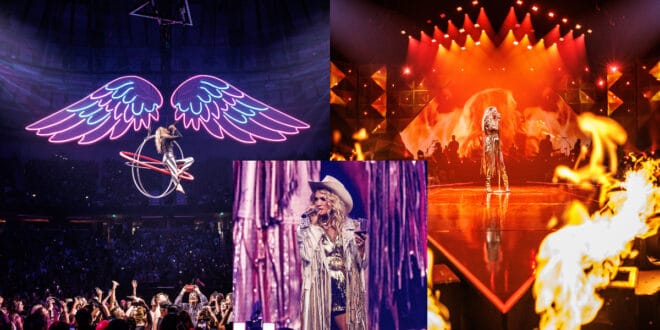 Underwood’s visually stunning production value on this trek is unlike anything fans have ever seen from the Oklahoma native and takes her live concert to the next level with the newly-added aerial displays, pyro, and much more.

The pyro on burn is insane pic.twitter.com/0xbBORI9R4

Underwood performed several tracks off her Denim & Rhinestones album, including “Garden,” “Crazy Angels,” “Cry Pretty,” and her new single, “Hate My Heart.” She also sang several of her chart-topping hits such as “Good Girl,” “Cowboy Casanova,” and “Before He Cheats” throughout the 24-song set.

According to several concertgoers, Underwood’s performance of “Jesus Take The Wheel” and “How Great Thou Art” was truly a spiritual experience.

The eight-time GRAMMY winner also made good on her promise to fans to get a little “dangerous” during the show with several aerial performances. During “Ghost Story,” Underwood reimagined the music video with a similar outfit and swing as she floated over the fans in the general admission pit area to make her way to the B-stage.

Later, she made her way back to the diamond-shaped stage by hovering over the massive arena crowd while doing acrobatics in a sphere high above them during “Crazy Angels.”

Throughout her lengthy set, Underwood had several outfit changes, each of which paired perfectly with the song she was performing.

The country superstar embraced the Denim & Rhinestones lifestyle within her wardrobe, which included a plethora of denim and rhinestones attire as well as a dress and leather ensembles.

Underwood welcomed Jimmie Allen, who serves as direct support on the trek, back to the stage for a collaborative performance of “Denim & Rhinestones.” The artists showcased their dance moves with what appeared to be a choreographed dance routine.

“I felt like he made sense,” Underwood explained to Country Countdown USA. “He embodies denim & rhinestones, almost as much as I did.”

The three-time ACM Entertainer of the Year also put her love for rock music on full display with a cover of Guns N’ Roses’ “Welcome To The Jungle.” Underwood also showcased a new talent as she took to a drum kit for an epic drum solo during “Poor Everybody Else” that made for a highlight of her set.

“The greatest female vocalist of her generation” – @RollingStone @carrieunderwood 👏🏻👏🏻 pic.twitter.com/WxCGxEFTWu

Carrie Underwood is, and always will be, THE entertainer of a lifetime.

We have reached the all out rock portion 🤘🏼 @carrieunderwood #DeminAndRhinestones pic.twitter.com/P6dHhB5Myd

Did someone say entertainer of the year???? @CountryMusic @carrieunderwood pic.twitter.com/yjflwBKUqm

This is the best moment of my life. 🔥 🔥 #DenimAndRhinestonesTour @carrieunderwood pic.twitter.com/6Fhg6olXKK

So she’s like fearless, huh?! This was so beautiful!! #DenimAndRhinestonesTour @carrieunderwood pic.twitter.com/zIh7afWlMs

“If you reap what you sow, what kind of garden would you grow?” Oh this is one that gives you such perspective in life. So glad “Garden” is on the setlist and bringing the sentiment into the show. Thank you @carrieunderwood #DenimAndRhinestonesTour pic.twitter.com/yawWrZEjfU

. @carrieunderwood performing “if i didn’t love you” on the denim & rhinestones tour! pic.twitter.com/gMJZ387leU

Excuse my singing and jawdropping as I watch @carrieunderwood took “Crazy Angels” to another level with those stunts. DANG CARRIE!!! This tour is a WHOLE OTHER LEVEL!! pic.twitter.com/oIlrdYTmQK

The Denim & Rhinestones Tour is in support of Underwood’s latest album, Denim & Rhinestones, which arrived on June 10 via UMG Nashville. The 12-track project includes her latest single “Hate My Heart,” as well as “Ghost Story,” “Crazy Angels,” and more.

Produced by AEG Presents, the Denim & Rhinestones Tour will take Underwood through 43 cities, and currently runs through March 17 in Seattle, Washington.

Underwood will donate $1 from each ticket sold to the Tunnel to Towers Foundation (t2t.org), which has been helping America’s heroes since 9/11 by providing mortgage-free homes to Gold Star and fallen first responder families with young children and by building custom-designed smart homes for catastrophically injured veterans and first responders. The Foundation is also committed to eradicating veteran homelessness and aiding the victims of major U.S. disasters.