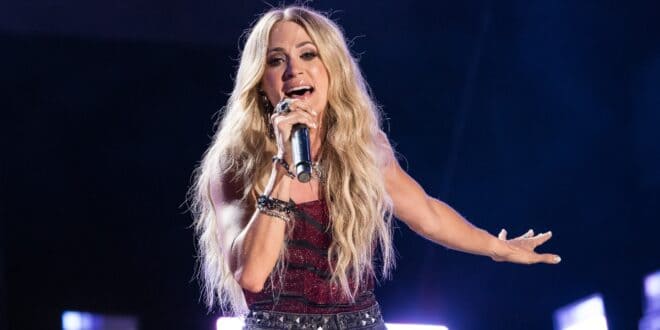 Carrie Underwood Says There Will Be “Some Surprises” On The Denim & Rhinestones Tour, Teases “I May Be Dangerous”

Carrie Underwood is gearing up for her highly-anticipated The Denim & Rhinestone Tour and she is giving fans some insight on what they can expect from the upcoming trek named after her current album.

The eight-time GRAMMY Award-winning artist recently guest-hosted the Country Countdown USA, where she opened up about going out on the road. She told listeners and ​​host Lon Helton “[the tour] is going to be very spectacular” and “there will be some surprises as far as songs.”

Underwood clarified those song surprises don’t mean her lengthy catalog of hits (although she does promise plenty of fan-favorites and new tracks from her Denim & Rhinestones album), but rather a familiar cover song or two.

“If we can pull it off, it’ll be a fun, cool moment. I might cover a fun song. So there’s that,” she added.

For the tour, which follows her first-ever residency, REFLECTION: The Las Vegas Residency at The Theatre at Resorts World Las Vegas, Underwood will bring along Jimmie Allen and she previously hinted that she may sing a duet with the “Best Shot” singer on the trek.

“I felt like he made sense. He embodies denim & rhinestones almost as much as I did. At least we know we will have a lot of bling and plenty of rhinestones for wardrobe,” she shared, reasoning Allen’s sense of style as part of why she chose to have him on the bill. “We may even get together on stage. It’s always a shame, if I was to have somebody like him out, it would be a shame not to get to sing with him while we’re on stage.”

Earlier this month, the pair celebrated their upcoming venture with a photo on Instagram. The picture shows Underwood and Allen posing side-by-side against a colorful background.

“We’re just one month away from the #DenimAndRhinestonesTour! Do you have your denim and rhinestones ready, @jimmieallen? 👖💜💎 🎫: carrieunderwoodofficial.com/tour,” Underwood captioned the post, requesting comment from Allen.

When she hits the stage, Underwood will be prepared to indulge in a variety of costume changes. And she says she hopes to see fans in the audience dressed up in their denim and rhinestone flair.

“There’ll be a lot of denim, a lot of rhinestones. I encourage everyone to dress up. I want to see the denim & rhinestones look. Just make it a night! Just have fun with it,” the “Ghost Story” singer pronounced.

Don’t expect Underwood to play it safe, either. The 39-year-old mother of two has been working hard, hitting the pavement as she readies the trek, telling folks she may be incorporating some new risky athletic movements into her performance.

“You should look up from time to time,” she said. “I have a B stage, so I’ve got to get out there somehow. I may be dangerous.”

Underwood is no stranger to taking risks, as she has tested out a few movements in the past. Fans may recall at the 2022 CMT Music Awards, Underwood soared to new heights while spinning in the air on a rope during her show-stopping “Ghost Story” performance.

“This will be a little different than that,” she explained.

Beyond that, fans can look for a stage that, according to Ticketmaster, is shaped like a diamond. The stunning visual production for the trek was directed by Barry Lather (Rihanna, Mariah Carey, Michael Jackson), and Production Designer Nick Whitehouse/Fireplay (Justin Timberlake, Beyoncé).

“We’re doing all of our music rehearsals right now, and it’s we just go, and we do what we do, and we have fun, and we hang out,” Underwood previously told CMT. “But it doesn’t quite feel real until you are there in an arena, and it’s like, ‘Here’s your stage.’ That’s going be the, ‘Oh my gosh moment.'”

As previously mentioned, Allen will serve as the special guest for the fall tour, and fans can purchase tickets here.