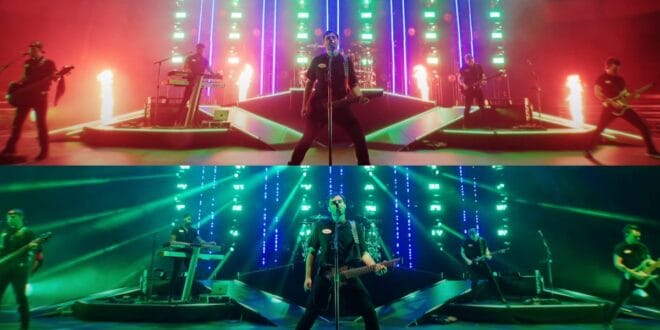 The band, comprised of a talented group of Nashville-based musicians (who’ve met playing in Morgan Wallen’s band), shared a cover of the popular Wallen track on Friday (Sept. 30).

Mechanics Wanted also released an official music video for the cover, which was filmed at Landers Center in Southaven, Mississippi.

The music video features the band delivering an energy-filled performance of the fiery metal cover surrounded by the same visually stunning production that is seen during Wallen’s headlining concerts. Created with the help of other Wallen team members, including Zac Coren (Lighting Director), Josh (Pyrotechnician), and David Lehr (Content Creator), who filmed and edited the clip, the clip truly brings the rowdy rendition of the Wallen hit to life.

After seeing the band’s cover of his fan-favorite tune, Wallen took to his Instagram stories to praise the group’s talents.

“I got the tightest band in all the land,” Wallen wrote, sharing the cover in his Instagram stories.

Through Mechanics Wanted, the group of musicians wanted to showcase their rock roots and turn popular mainstream and rock hits into fiery metal covers.

Mechanics Wanted is made up of Wallen’s bandmate’s Mark “Taco” Annino (Drums), Luke Cowboy Rice (Bass/Guitar), Tyler Tomlinson (Guitar), Chris Gladden (Keys), Tony Aichele (Guitar) and Dominic Frost (Guitar/Lead Vocals). Taco, Luke and Dom first met back in 2015 when joining Wallen’s band. Then, Tyler joined the group in 2018 and in 2020 they decided to get creative and form a metal band during their downtime off the road. The band’s name comes as a play off of Morgan Wallen’s MW acronym, and the Mechanics part of their name stems from their onstage uniforms that they wear while performing with Wallen.

“We realized we had something really cool, that we wanted to share to the world, but with any great project we needed a name,” Frost previously shared. “We thought doing a double entendre on the ‘MW’ along with our mechanics stage shirts that we wear for Morgan, we landed on “Mechanics Wanted”

Mechanics Wanted made their debut in August of 2020 when they shared a metal cover of Diplo and Morgan Wallen’s “Heartless.”

Their choice to release “Heartless” as their first cover was a no-brainer as they thought it’d be a perfect debut release, as they are the same live band that plays it live with Wallen each night on the road and they figured it would be them covering Wallen’s song in a new way.

When being asked if Wallen heard their cover, they told Music Mayhem that they actually were going to try and get Morgan on the metal version of the song, but the country superstar felt that it was important for it to be solely the band so that they can showcase more of their own talents.

“I know Morgan has heard it and him having a love for rock himself absolutely loved it,” Taco said. “Originally we were gonna try and get Morgan on the song. But he actually felt that it was important for it to solely be us, not for anything other than that. To showcase more of our talent. And see it stand on its own.”

The band’s cover of “Heartless” was so well received that the group decided to move forward and release another cover in late December 2020, which was an impressive cover of Ariana Grande’s “Positions” with some assistance from country riser Ashland Craft.

Luke arranged this entire cover out of “sheer boredom one day” and after getting the green light from the rest of the team to cover Grande’s hit, they went to the studio and began working on it. While working on the song, they thought the cover needed some strong female vocals and immediately thought of Craft.

“I came home one day and Luke had done a complete arrangement of ‘Positions’ out of boredom and showed me what he’d done,” Taco explained of their Craft collaboration. “I thought this might be a great second release for us to do, and we sent it out to the rest of the guys to get their thoughts, which we all signed off on. I had the idea of featuring a female vocal on this record, and we had just gotten off the road with Ashland Craft earlier in the year. So we reached out to her camp to see if he would be interested in doing this with us, and she graciously said yes. And the rest is history.”

Following their Grande cover, Mechanics Wanted went on to release a metalcore cover of All Time Low and Blackbear’s chart-topping hit, “Monsters,” with some assistance from fast-rising country star ERNEST.

Stay tuned for what is to come from Mechanics Wanted as they have plans to continue releasing metal covers while they toy with several original songs that they have written. The group also may even put out “a full record or EP of both original songs and covers” in the future.