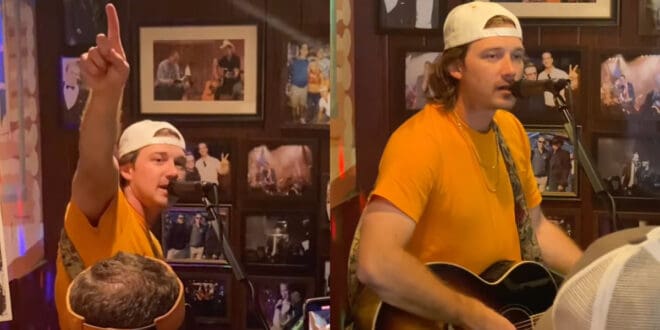 Morgan Wallen shocked patrons at Saloon 16 inside The Graduate Knoxville in East Tennessee with a surprise performance on Saturday evening (Oct. 15) after the Tennessee Volunteers big win (final score 52-49) against Alabama Crimson Tide, a victory that marked their first against the team since 2006.

The country superstar celebrated the Volunteers’ big win with a three song performance that included “The Way I Talk,” “Sand In My Boots” and the fan-favorite hit, “Cover Me Up.”

He launched the pop-up performance with “The Way I Talk” from his debut album, If I Know Me, which was released in 2018. After singing most of the tune, Wallen paused to share a message with the saloon patrons with a big smile on his face.

“Hey, I ain’t never been more proud to sing this last chorus right here tonight. If you know me and if you know yourself and you’re from Knoxville or you’re from Tennessee and we just beat Alabama you better sing this part,” Wallen told the packed Saloon. “Shoutout to my mama and my daddy and to my little boy [Indigo]. I love all three of them the same.”

He then finished out his performance of “The Way I Talk” with a massive sing-along with a bar full of excited Tennessee Volunteers fans.

“I sound a little bit like my daddy / I don’t cuss around my mama / Got some words you’ve never heard / ‘Less you come from down yonder / The man upstairs gets it / So I ain’t tryna fix it / No I can’t hide it / I don’t fight it, I just roll with it / Oh, kinda slow like the Mississippi rolls / It’s the only way I know / Man it ain’t my fault / I just live the way I talk,” he sang to finish out the tune, which was co-written by Jessi Leigh Alexander, Ben Hayslip and Richard Chase McGill.

He then performed a pair of songs from his record-breaking sophomore project, Dangerous: The Double Album, including his chart-topping hit “Sand In My Boots” and fan-favorite tune “Cover Me Up,” a song written and originally recorded by Jason Isbell.

While performing “Sand In My Boots,” Wallen changed up the lyrics to further celebrate the Volunteers’ victory.

“Sand In My Boots”

@morganwallen changed up the lyrics for #SandInMyBoots during his surprise pop-up performance in Knoxville to celebrate the Tennessee Volunteers’ victory! #MorganWallen 🎥: @chelsea330j

He concluded his surprise performance with “Cover Me Up,” which you can watch below.

Morgan Wallen Hung Out With Kelsea Ballerini, Kenny Chesney and Peyton Manning Ahead Of The Tennessee Volunteers Game

Earlier in the day, Wallen joined fellow country superstar’s Kelsea Ballerini, and Kenny Chesney at the same saloon to spend some time with one of the greatest quarterbacks of all time, Peyton Manning, in Knoxville ahead of the Tennessee Volunteers football game against Alabama Crimson Tide.

The trio of East Tennessee natives and the former NFL quarterback, who has been nicknamed “The Sheriff” and spent 14 seasons with the Indianapolis Colts and four with the Denver Broncos, were pictured prior to kickoff at the Saloon, which is located just minutes away from Neyland Stadium.

In the photo shared by Saloon 16, Wallen, Ballerini, and Chesney are seen dressed in Tennessee orange in support of their hometown team with Manning, who also served as the College Game Day guest picker.

In addition to posing for a quick photo together, the three country superstars and the legendary quarterback even served up some drinks from behind the bar, according to a Morgan Wallen fan page on Instagram.

Ballerini also shared a clip on TikTok, which has quickly amassed over 1.5 million views, that included Wallen, Chesney and Manning cheering on The Volunteers.

The news comes just one day after Wallen made headlines when he joined Jason Aldean on stage in Nashville at Bridgestone Arena for a two-song performance that included “Whiskey Glasses” and “You Make It Easy,” a tune he co-wrote with Tyler Hubbard and Brian Kelley that appears on Aldean’s 2018 album, Rearview Town.

Wallen also recently wrapped up his recording-breaking, headlining Dangerous Tour, which was completely sold out, selling over 839,704 tickets. The trek concluded at with his first-ever headlining stadium concert at Globe Life Field in Arlington, Texas, which broke attendance records at the venue.

The “You Proof” hitmaker will soon conclude his tour schedule for 2022 with a performance at Country Thunder in Kissimmee, FL on October 22, 2022.