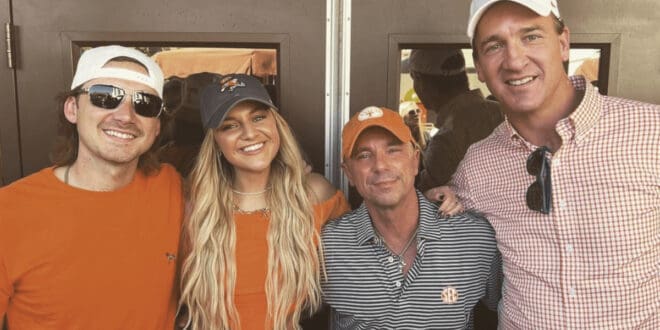 Country superstars Morgan Wallen, Kelsea Ballerini, and Kenny Chesney hung out with one of the greatest quarterbacks of all time, Peyton Manning, in Knoxville ahead of the Tennessee Volunteers football game against Alabama Crimson Tide.

On Saturday (Oct. 15), the trio of East Tennessee natives and the former NFL quarterback, who has been nicknamed “The Sheriff” and spent 14 seasons with the Indianapolis Colts and four with the Denver Broncos, were pictured prior to kickoff at the Saloon 16 inside The Graduate Knoxville. The Saloon is located just minutes away from Neyland Stadium, where the Tennessee Volunteers and Alabama Crimson Tide faced off later in the evening.

In a photo shared by Saloon 16, Wallen, Ballerini, and Chesney made their way to East Tennessee dressed in Tennessee orange in support of their hometown team and spent some time with Manning, who also served as the College Game Day guest picker.

In addition to posing for a quick photo together, the three country superstars and the legendary quarterback even served up some drinks from behind the bar, according to a Morgan Wallen fan page on Instagram.

Wallen was also sure to wave to fans who happened to be grabbing a drink or a quick bite to eat the Saloon ahead of the big game.

Wallen, Ballerini, Chesney and Manning also each shared a video message in a clip shared to social media shouting, “Go Vols,” in support of their hometown team in East Tennessee.

East Tennessee showed up in Tennessee orange and lined the streets of Knoxville with thousands of fans, who were there to support the Volunteers.

Following the Tennessee Volunteers’ big win, Chesney took to social media to celebrate with a photo at the game.

“Great to be back in Rocky Top. What a game!!” he captioned a black and white photo of himself at Neyland Stadium in Knoxville.

The news comes just one day after Wallen made headlines when he joined Jason Aldean on stage in Nashville at Bridgestone Arena for a two-song performance that included “Whiskey Glasses” and “You Make It Easy,” a tune he co-wrote with Tyler Hubbard and Brian Kelley that appears on Aldean’s 2018 album, Rearview Town.

Wallen also recently wrapped up his recording-breaking, headlining Dangerous Tour, which was completely sold out, selling over 839,704 tickets. The trek concluded at with his first-ever headlining stadium concert at Globe Life Field in Arlington, Texas, which broke attendance records at the venue.

Kelsea Ballerini’s 10-date Heartfirst Tour came to a close on Friday evening (Oct. 14) in Mashantucket, CT. The tour, which is in support of her latest album Subject To Change, featured opener Georgia Webster.

During Ballerini’s show at the Greek Theatre in Los Angeles in the midst of her Heartfirst Tour, Chesney surprised his duet partner while she was performing to join her for a performance of their chart-topping collaboration, “Half Of My Hometown,” a tune that celebrates their hometown of East Tennessee.

In August of 2022, Kenny Chesney wrapped his Here And Now Tour, which sold over 1.2 million tickets and marked his highest-grossing tour ever with $135 million, according to Pollstar. The eight-time Entertainer of the Year kicked off his Here And Now Tour back in April at Raymond James Stadium in Tampa, Florida, a show that broke Chesney’s own 2018 attendance record with 58,369 fans.

“Honestly, being on stage has never felt that electric! No Shoes Nation has always been a very passionate place, but this year, the energy was unlike anything I’ve ever experienced,” he said during an interview with Pollstar.