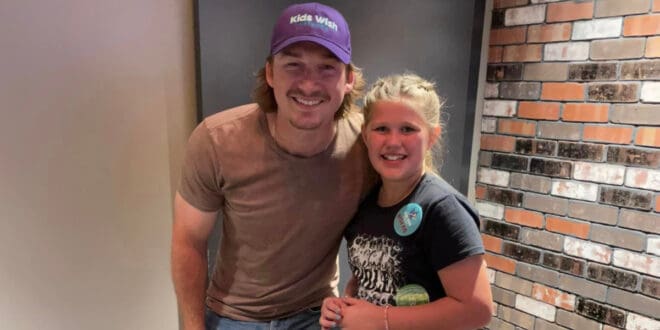 Morgan Wallen may be one of the biggest stars in country music. But, what folks might not know, is he also has a big heart. The 29-year-old hitmaker proved that recently when he met up with one of his sweetest fans – a girl named Brynlee.

10-year-old Brynlee is like any other child. She loves painting, playing sports, and going shopping. But, what may come as a surprise to some is the smiling girl, who seems to be full of life, suffers from a rare condition called Tetralogy of Fallot. According to Mayo Clinic, Tetralogy of Fallot is caused by a combination of four heart defects that are present at birth (congenital).

Folks at The Kids Wish Network noticed Brynlee’s bravery, as she had been forced to undergo a multitude of surgeries that kept her returning to the hospital. To celebrate the child, The Kids Wish Network, as seen on their website, reached out to Wallen, so the two could meet face-to-face.

Ever since she heard of the “You Proof” singer, Brynlee has become one of his biggest fans. So finding out she would get to spend time with Wallen – and attend his concert – must’ve been a dream come true for her!

And, likewise for Wallen. Getting to know Brynlee and her strength was probably a special moment for him.

“This is my first time going on a flight and being in an airplane. So, this is exciting,” Brynlee, who had also never been to a live show before shares in a YouTube clip, uploaded by The Kids Wish Network. “…I’m actually going to get to go to a Morgan Wallen concert.”

Brynlee was introduced to Wallen ahead of his Dangerous Tour stop at the Lakewood Amphitheatre on Friday (Aug. 5). And, the two hit it off! A clip posted to The Kids Wish Network’s Facebook account shows the pair high-fiving and posing for several pictures.

Aside from experiencing a private meet-and-greet with Wallen, Brynlee also got whisked away to the Embassy Suites by Hilton Atlanta at Centennial Olympic Park. She even went on a behind-the-scenes tour at the Georgia Aquarium! But it appears as though her exchange with Wallen topped it all!

More photos from Brynlee’s experience have been shared on The Kids Wish Network’s Instagram page.

“✨One nomination gave Brynlee an experience that put her in the spotlight! Watch Brynlee live her Wish come true, then visit our website to make your nomination. You can be the reason a child gets their Wish! (link in bio)✨,” a caption reads on Instagram, alongside a photo of Brynlee looking up while inside the Georgia Aquarium.

“Even though Wishes are all about the children, they positively impact the entire family. From the second Brynlee’s nomination was made, hope ignited for her whole family,” another caption reads, alongside a photo of Brynlee posing with her parents. “They all had something exciting on the horizon. A chance to escape their day-to-day grind and watch Brynlee smile again, the same child whose illness may have extinguished any joy. That is priceless — that is what Wishes do!”

A third photo shared to Instagram, uploaded by The Kids Wish Network, shows Brynlee adorably holding a stuffed bear atop her head as she happily poses for the camera.

“When she was nominated for a Wish! Instantly, Brynlee had something magical to look forward to,” a portion of the caption reads. “An experience that would celebrate her and the resilience she demonstrated through every obstacle she has overcome.”

Wallen’s next show is scheduled to take place at Country Thunder in Kissimmee, FL, on October 22. The concert will mark Wallen’s final show of the year and complete his 2022 touring schedule.

Click HERE to find out how you can help grant a wish with The Kids Wish Network.

Previous Keith Urban Will Not Be Returning To ‘The Voice,’ Hopes To Spend More Time With His Wife & Family
Next Blink-182, Green Day, Something Corporate, Good Charlotte & More To Perform At 2023 When We Were Young Festival