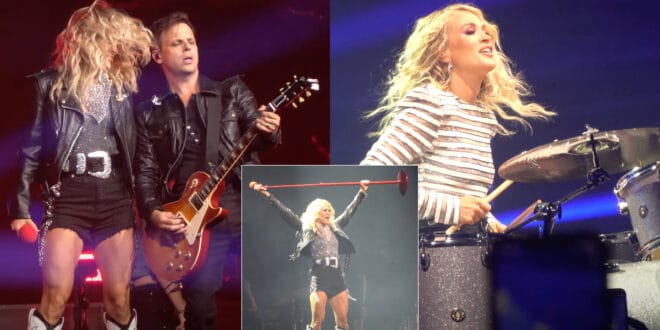 Carrie Underwood proved she is a true rock star as she kicked off her highly-anticipated 43-city Denim & Rhinestones Tour on Saturday (Oct. 15) with a sold-out concert at Bon Secours Wellness Arena in Greenville, South Carolina.

The three-time ACM Entertainer of the Year put her love for rock music on full display throughout her electrifying 24-song set during which Underwood added a rock edge to multiple songs from her catalog, including “Before He Cheats,” “Good Girl,” “Two Black Cadillacs,” “Crazy Angels,” “Church Bells,” “Blown Away,” among others.

In addition to adding a rock flair to many of her hits, Underwood also showcased a new talent in the midst of her set as she took to a glittery drum kit for an epic drum solo during “Poor Everybody Else” that had fans jaws-dropping and made for a highlight of her show-stopping set.

My husband said, she really “one ups” herself every show. Learning new things and taking it to the next level 🤩 @carrieunderwood pic.twitter.com/uTunn8fVM4

Later in the set during Underwood’s encore, she returned to the stage for an energy-filled cover of Guns N’ Roses’ “Welcome To The Jungle.” Her performance of the tune truly wowed the crowd as she allowed her rock n’ roll influences to shine with the epic cover.

Earlier this year, Underwood joined Guns N’ Roses during their headlining set at Tottenham Hotspur Stadium in the United Kingdom for a rockin’ two-song performance of “Sweet Child O’ Mine” and “Paradise City.”

“Together again…but this time in London and with a few more friends!

” Underwood wrote. “Thanks, @gunsnroses and your crew for welcoming me into your world like family. And thanks to all the fans who gave these legends the royal welcome that they deserve! I am but a fan who somehow managed to find her way on stage to have a moment of magic with her heroes! How did I get so lucky?”

“Welcome to the greatest night of my life! Give it up for Axl Rose,” as she at the time as the “Welcome To The Jungle” singer entered the massive festival stage.

Following the performance, Underwood dubbed the evening the “Best. Night. Of. My. Life!!!” and also wrote, “I am still freaking out!!! Thank you, Axl, for making this lifelong dream come true!!! You rocked that @stagecoach stage harder than anyone has ever rocked it before!

@carrieunderwood fulfilling a lifelong dream of performing alongside @gunsnroses singer Axl Rose as they performed “Paradise City” at Stagecoach! 🎥 Courtesy of Stagecoach/YouTube

In 2015, Underwood, an avid fan of classic rock, told E! Online an interview that she found her voice from listening to artists like the Guns N’ Roses’ singer.

“I’ve covered enough Guns N’ Roses stuff, and it was people like him who taught me how to sing,” Underwood previously told the outlet. “I look at people like him and Freddie Mercury, those people who were doing all these crazy runs. It was so different.”

Two years ago, while chatting with Jimmy Fallon on The Tonight Show Starring Jimmy Fallon, Underwood talked about flying to Las Vegas to see her favorite band, Guns N’ Roses, for the first time and she declared it was “one of the best nights” of her life.

“We were nowhere near Las Vegas, so naturally I said, ‘Let’s go to Las Vegas with the band and go see GN’R play,’” Underwood told Fallon at the time. “It’s kind of a life-long dream of mine I never thought would happen. Couldn’t waste that opportunity, so I abandoned my husband, abandoned my children, went to Vegas, and saw Guns N’ Roses. Amazing.”

Produced by AEG Presents, the Denim & Rhinestones Tour kicked off on October 15 in Greenville, South Carolina at Bon Secours Wellness Arena. The trek will take Underwood through 43 cities, and currently runs through March 17, where the tour will wrap up in Seattle, Washington.

Underwood will donate $1 from each ticket sold to the Tunnel to Towers Foundation (t2t.org), which has been helping America’s heroes since 9/11 by providing mortgage-free homes to Gold Star and fallen first responder families with young children and by building custom-designed smart homes for catastrophically injured veterans and first responders. The Foundation is also committed to eradicating veteran homelessness and aiding the victims of major U.S. disasters.

The Denim & Rhinestones Tour comes in support of Underwood’s latest album, Denim & Rhinestones, which arrived on June 10 via UMG Nashville. The 12-track project includes her latest single “Hate My Heart,” as well as “Ghost Story,” “Crazy Angels,” and more.

Tickets for the Denim & Rhinestones Tour are on sale now HERE.