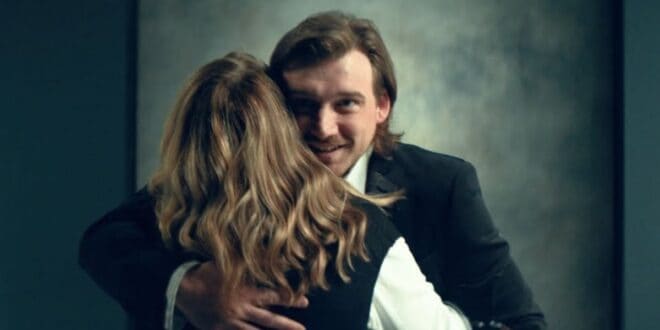 Morgan Wallen shares precious memories with his mother, Lesli Wallen, in the just released “Thought You Should Know” music video.

The country superstar and East Tennessee native shared the music video for his latest single at Country radio on Thursday (Nov. 24) in honor of Thanksgiving and to remind viewers how grateful he is for his fans, his mama Lesli, his family, and the good Lord.

“Hope y’all have a Happy Thanksgiving,” Wallen wrote on social media, revealing he released the music video for the tune. “Wanted to remind y’all how grateful I am for you, for my family, my mama and our good Lord. Y’all have really made this a special year for me…”

The music video begins with Lesli holding Morgan Wallen on his second birthday as The Wallen Family sings Happy Birthday to him. The clip then cuts to Wallen performing the heartfelt tune in a studio space as his mother watched on and sing-along from behind the camera in a director’s chair.

The clip features personal Wallen family footage and videos of Wallen with his Mama intertwined with clips of Wallen performing the chart-climbing single. The music video also includes clips of Wallen and his mother getting ready for the 2022 Billboard Music Awards, where Lesli joined her son on the award show’s red carpet as his date for the evening.

Directed by Justin Clough, the “Thought You Should Know” music video concludes as Wallen’s mother walks over to him as the song comes to a close and the mother and son share a sweet moment as they hug and laugh together.

Watch Morgan Wallen’s “Thought You Should Know” Music Video Below.

“Thought You Should Know,” recently made a major impact at country radio upon its official add date on Monday (Nov. 7) with a whopping 64 first-week adds and 82 overall.

The tender song, which plays out like a letter from Wallen to his mother, Lesli, was released on Mother’s Day after teasing it for several months.

“This one’s for you mama. I know it didn’t always seem like those prayers were getting through. I Hope this song is a testament to the fact that they did,” Wallen wrote on social media upon the song’s release. “Still your only damn son, Morgan”

The track, co-written by Wallen alongside Miranda Lambert and Nicolle Galyon, comes in the form of a phone call to his mom, Lesli, and finds the country hitmaker giving her an update on his life and all the things that he has gone through recently.

“What’s going on mama? / Something’s just dawned on me / I ain’t been home in some months / Been chasing songs and women / Making some bad decisions / God knows I’m drinking too much / Yeah, I know you’ve been worrying ‘bout me / You’ve been losing sleep since ’93,” Wallen sings.

Wallen first shared the song with fans on social media in the Spring of 2021, when he released a live acoustic performance of the tune on Instagram. The clip has amassed over 2.7 million views since he teased it.

Wallen shared the clip on May 22, 2021, and at the time he introduced the song by saying, “Wrote this song for my mom a while ago. Seemed like an appropriate time to share it.”

Wallen, who has recently teased several new songs, including “Tennessee Fan” and “Me + All Your Reasons,” confirmed that he’s been in the studio working on new music.

“Me and HARDY just wrote one on the road the other day that I’m really pumped about. It’s one of the best ones that we’ve written in a long time, if not ever,” the CMA Awards nominee went on to say.

Morgan Wallen recently played his final show of the year and is currently working on his new album.