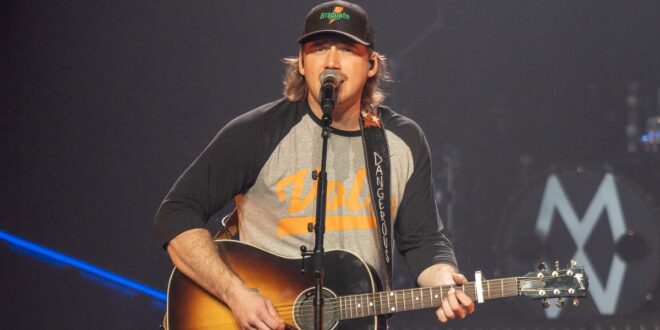 Morgan Wallen is celebrating the Tennessee Volunteers victory over Alabama’s Crimson Tide with a clip of a brand-new, unreleased song, “Tennessee Fan.”

The country superstar took to social media hours after the Volunteers’ big win on Saturday evening (Oct. 15) to share footage of his time at the big game, which was soundtrack by a new tune.

The Tennessee Volunteers were victorious (final score 52-49) against Alabama’s Crimson Tide this past weekend, which marked the Volunteers’ first win against the team since 2006.

In addition to sharing a new song teaser, Wallen also shocked patrons after the Volunteers game at Saloon 16 inside The Graduate Knoxville with a surprise three-song performance that included “The Way I Talk,” “Sand In My Boots” and the fan-favorite hit, “Cover Me Up.”

He launched the pop-up performance with “The Way I Talk” from his debut album, If I Know Me, which was released in 2018. After singing most of the tune, Wallen paused to share a message with the saloon patrons with a big smile on his face.

“Hey, I ain’t never been more proud to sing this last chorus right here tonight. If you know me and if you know yourself and you’re from Knoxville or you’re from Tennessee and we just beat Alabama you better sing this part,” Wallen told the packed Saloon. “Shoutout to my mama and my daddy and to my little boy [Indigo]. I love all three of them the same.”

He then finished out his performance of “The Way I Talk” with a massive sing-along with a bar full of excited Tennessee Volunteers fans.

He then performed a pair of songs from his record-breaking sophomore project, Dangerous: The Double Album, including his chart-topping hit “Sand In My Boots” and fan-favorite tune “Cover Me Up,” a song written and originally recorded by Jason Isbell.

While performing “Sand In My Boots,” Wallen changed up the lyrics to further celebrate the Volunteers’ victory.

@morganwallen changed up the lyrics for #SandInMyBoots during his surprise pop-up performance in Knoxville to celebrate the Tennessee Volunteers’ victory! #MorganWallen 🎥: @chelsea330j

He concluded his surprise performance with “Cover Me Up.”

Wallen also joined his fellow East Tennessee natives’ Kelsea Ballerini and Kenny Chesney at the same saloon to spend some time with one of the greatest quarterbacks of all time, Peyton Manning, in Knoxville ahead of the Tennessee Volunteers football game against Alabama Crimson Tide.

The trio of country hitmakers and the former NFL quarterback, who has been nicknamed “The Sheriff” and spent 14 seasons with the Indianapolis Colts and four with the Denver Broncos, were pictured prior to kickoff at the Saloon, which is located just minutes away from Neyland Stadium.

In the photo shared by Saloon 16, Wallen, Ballerini, and Chesney are seen dressed in Tennessee orange in support of their hometown team with Manning, who also served as the College Game Day guest picker.

The “You Proof” hitmaker will soon conclude his tour schedule for 2022 with a performance at Country Thunder in Kissimmee, FL on October 22, 2022.

Previous WATCH: Kelly Clarkson & Dwayne “The Rock” Johnson Sing Duet Of Loretta Lynn Hit In Honor Of The Late Country Music Icon
Next Miranda Lambert All Smiles In New Photos With Her Paw Paw On The “Best Lunch Date Ever”