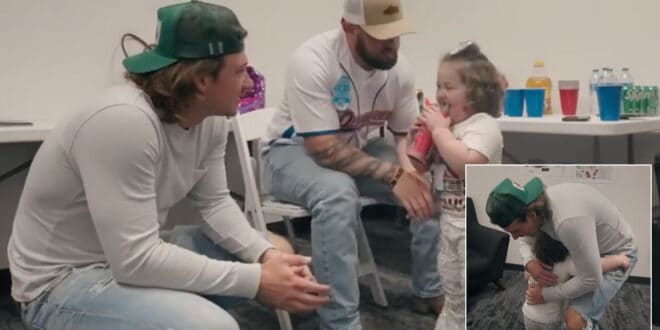 Morgan Wallen has been showing his generous heart in new ways during his time on the road. Before wrapping up his record-breaking 2022 Dangerous Tour, the country star flew a little girl named Gracie to see him on the final stop of his headlining trek.

Gracie, who considers herself a huge fan of Wallen, is only five years old. But she’s one tough cookie. The young fan has been braving an uphill battle with Leukemia. To help lift her spirits, Wallen arranged a flight for the sweet child so she could attend his first-ever headlining stadium show at Globe Life Field in Arlington, Texas on (Oct. 8).

Judging by a few Instagram posts shared by her mom, Gracie enjoyed every minute of the “You Proof” singers concert.

“Gracie’s first reaction to Morgan Singing, 💕” One caption reads alongside a clip that shows the youngster seated on her dad’s shoulders and dancing along to Wallen’s “Broadway Girls” with Lil Durk.

Another post on the @prayersforgracie Instagram profile features a carousel of photos that show Wallen performing his set.

“Pictures of Gracies Biggest Fan! ♥️,” the caption reads underneath the slideshow.

“We had an amazing time 🌟,” Gracie’s mom confirms in a third post, which shows a series of snaps with little Gracie dressed in a Morgan Wallen shirt and sparkle pants.

Ahead of his show, Wallen took the time to meet with Gracie and her parents who were likely overjoyed to see their child’s face light up over the meet-and-greet experience.

A video featuring that face-to-face moment blew up on TikTok after it was posted to a page set up in Gracie’s honor.

The clip shows Wallen making his way into a room where Gracie awaits with her mom and dad. Once the little girl sees Wallen in person, she immediately breaks into a smile. The child, sporting her hair pinned back with a bow, runs toward Wallen and the two share a heartwarming hug.

Afterward, Wallen bends his knees to match the height of his adorable fan and gives her his full attention as he learns her age and personality. The youngster clearly can’t help but become shy at the excitement of sharing an exchange with her hero star.

“Gracie’s Dream Came True” can be seen spread across the video, which has touched hearts everywhere.

Wallen has numerous fans, but Gracie certainly has a shot at laying claim as one of the biggest. In fact, she recently celebrated her birthday, marking the special occasion in Wallen fashion.

“Some pictures of Gracie’s Morgan Wallen Birthday♥️,” a caption reads alongside photos from the big day.

And it turns out Gracie’s meet with Wallen happened with the help of another fan. Those who viewed the meet-and-greet clip may have picked up on the name Brevin, mentioned by Gracie’s mom.

Wallen actually met Brevin Guidroz backstage at his recent concert. And it was Guidroz who requested Wallen meet Gracie after the country star asked him what he wanted for his birthday.

Wallen is currently working on a new album, following what has been a record-setting tour. His The Dangerous Tour, which he launched in support of his Dangerous: The Double Album, sold a total of 839,704 Tickets. Gracie was also part of a record-setting night for Wallen, as his show at the Globe Life Field set a new attendance record with 43,500 people in total at the concert.