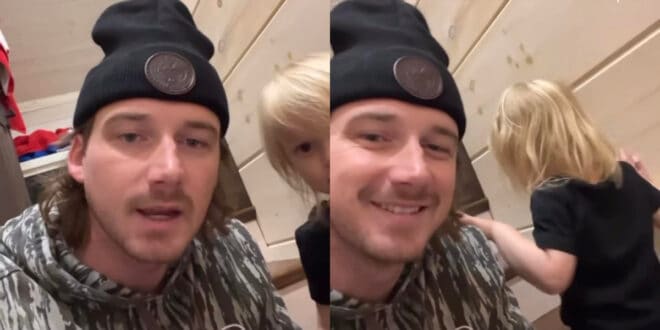 Morgan Wallen may be one of the biggest and busiest stars in country music, but he still prioritizes other important aspects of his life, which includes being a wonderful dad to his cute-as-a-button, two-year-old son Indigo (Indie) Wilder Wallen.

The sweet toddler was recently captured spending time with his country-singing daddy. And the footage is absolutely adorable!

In this clip, as seen on Wallen’s Instagram page, the “You Proof” hitmaker is shown reciting the beginning letters of the alphabet to his wide-eyed child, who loses focus and begins to turn away from the video camera to walk up some steps.

“A-B-C-D,” Wallen sings before waiting for Wilder to complete the alphabet. Wilder gets through the letter ‘G’ and then trails off into a bit of gibberish as his doting dad laughs along to his son’s behavior.

“Okay,” Wallen says, realizing his baby boy no longer wants to participate in the learning exercise.

“Me and Indie been taking video in the stairwell the last hour figured I’d share one that cracked me up,” Wallen wrote inside the clip, letting fans and followers know that he got a kick out of his kid’s hilarious behavior.

And while Wallen’s mini-me seems uninterested in memorizing his ABCs, the country crooner made sure to inform the audience of his child’s potential future as a singer.”

Indeed, it would be amazing if Wallen’s little one followed in his daddy’s footsteps. And it seems fans are already on-board with the idea of Wilder having a future in country music.

“He’s just writing songs in his head like his Daddy💙❤️ so adorable 🙏,” one fan wrote.

“He’s got the tune down 😂,” another fan captioned.

It is, of course, too early to tell whether or not Wilder will take an interest in the music and entertainment world, but if he did, he could be in good company.

Wallen is good buddies with fellow country stars ERNEST and Hardy. The trio often collaborate and write with each other, and have even appeared on each other’s tours. Perhaps the dads are paving the way for a new generation of heavy hitters.

Hardy, of course, doesn’t have kids – yet – but ERNEST, whose full name is Ernest Keith Smith, does. In a recent interview with Entertainment Tonight, ERNEST, who is father to nearly 2-year-old Ryman Saint Smith, opened up about the possibility of Wallen’s son and his son joining forces to one day be a duo.

“I mean, boy. There’s hell to be had,” ERNEST told Entertainment Tonight’s Cassie DiLaura. “Yeah, I could see a little duo. I think Wilder-Saint. Ryman’s middle name is Saint, you know Indigo Wilder and then Wilder-Saint, we kind of got the name picked out if they wanna do it.”

Fans will have to wait quite a while to see whether or not a dynamic duo unfolds between the famous friends’ kids. For now, folks can continue to be tickled by the cuteness overload of Wallen and Wilder’s father/son relationship.

Earlier last month, Wallen was seen testing out a new ROUSH truck with his toddler in tow.

“Me and little man testing out the new truck. He likes it and so does daddy,” Wallen, who shares Indigo with his ex, KT Smith, captioned the image of him and his son in his Instagram stories.

“It always really made me happy to have him and to know that I had a kid and someone who looked up to me, but the older he gets, you know, the more I see him becoming a person and becoming like me in ways. I don’t know man, I’m just proud, it makes me proud as hell,” Wallen told Backstage Country in an earlier interview. “… The older he gets, and the more time I get to spend with him, the more I really love it. I hope he’s as proud of me as I am of him. I know that.”

Wallen recently wrapped his record-breaking headlining Dangerous Tour and is currently working on his new album.