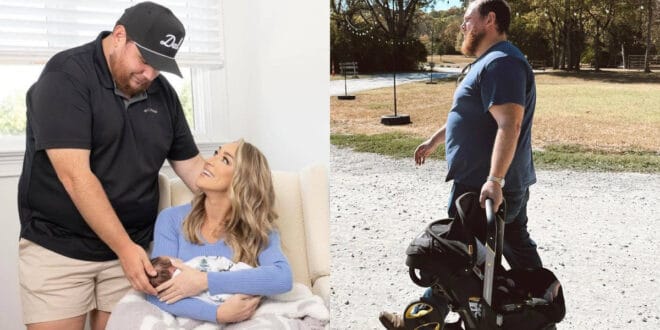 Luke Combs is enjoying being a dad to his son Tex Lawrence Combs. So much so that he calls the at-home job “amazing.” But that doesn’t mean being a first-time father hasn’t come with a few unpleasant surprises. The country hitmaker recently opened up about the adjustments he has had to make but never would’ve been aware of had it not been for the birth of his child.

“It’s amazing,” Combs said of fatherhood during a recent show on Keith Urban’s tour, according to CMT. “It really is. It’s totally different. Your life just completely changes. People say that all the time, and it probably sounds like the most cliché thing in the entire world, but it’s really true. It’s just really like, instantly. Everything’s completely different.”

Some of the new changes that Combs may have not prepared for have included dealing with dirty diapers and the ever-inevitable spit-up that comes along with raising an infant. But Combs says it’s something he’s gotten used to as he navigates the new chapter of his life.

“I’m just not bothered about being, like, just, you know, covered in someone else’s bodily fluids,” he admitted. “Like, I was really worried about that. It’s kind of one of these things where there’s no easing into this. You know what I mean?”

“It’s not like you leave the doctor or before you go have the kid, there’s not like someone calls and goes, ‘Okay, you’re having this kid (this) month. So every day for the next three days, you got to change a diaper a day, and then it’s going to go up to two.’ It just immediately goes to like eight or nine. It’d be gross if it were someone else’s kid. But when it’s your own, it all changes. You’re like, ‘Oh, cool. Yeah, whatever,'” he said.

Combs and his wife, Nicole Hocking, welcomed their baby boy into the world on Sunday (June 19). The bundle of joy named after Combs’ uncle and Nicole’s father, weighed 7lbs and 6oz.

“It’s going to be hard to top this past Father’s Day 🥲 Welcome to the world, Tex Lawrence Combs,” Nicole penned on Instagram, at the time. “You are the best chillest angel boy and I’m so happy I was chosen to be your mom. These are the days 🤍.”

“Welp. He decided that Father’s Day would be a good time to show up. I couldn’t agree more. I and @nicolejcombs are over the moon in love with this little guy,” Combs wrote on Instagram, sharing the same picture as his wife. Mama and baby are healthy, and we’re back home now with family. Life is good. Everyone welcomes Tex Lawrence Combs to the world.”

Since the birth of his child, and despite his busy home life, Combs has managed to remain busy, performing various shows throughout the year. And it turns out he won’t be slowing down anytime soon. The “Going, Going, Gone” singer is currently in the midst of his headlining Middle Of Somewhere Tour, which continues through December 2022. In 2023, he will embark on an unprecedented world tour.