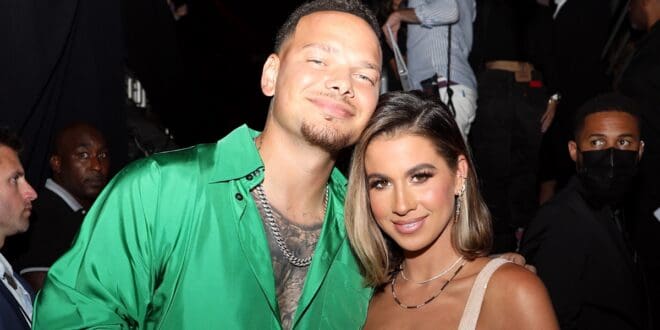 Now that Kane Brown and his wife Katelyn Brown have teamed up for a duet, he says fans can expect to hear them perform “Thank God” together during his upcoming concerts.

“We’ll have a nanny that can watch the kids while they are sleeping, and then Katelyn can be onstage and sing with me,” he tells Billboard. “We’ll do ‘Thank God,’ and she’ll sing Lauren’s part on ‘What Ifs.’ Katelyn hasn’t done anything musically since she left Orlando, so we just gotta get her bearings, like learning how to use the in-ears [monitors] onstage. She’s never used those before.”

The couple first met in 2015, while Katelyn was living in Orlando. Under the name Katelyn Jae, she previously recorded pop songs including “24KT” in 2014. Brown shared that even though his wife may be joining him on stage, she doesn’t have any plans to reignite her own music career.

“She doesn’t want to be an artist — she just loves singing,” Kane explains. “She’s always singing around the house and her voice is beautiful. We’ve been looking for songs and probably went through about five of them before we got this one from one of my writers at [publishing company] Verse 2 and it was supposed to be a solo song. We changed it to a duet, and she fell in love [with] this song. Personally, I think it is the biggest song off the record.”

Kane and Katelyn’s duet is already showing its potential for success, claiming the most adds at country radio in its first week.

“Thank God” appears on Kane’s album Different Man, which follows his second studio album Experiment, released in 2018. In August of 2020, Brown released his ACM-nominated EP, Mixtape Vol. 1, which included several hit singles such as “Cool Again,” “Worldwide Beautiful,” “Worship You” and his Top 40 radio single, “Be Like That” featuring Khalid and Swae Lee.

Kane is currently on his Drunk or Dreaming Tour, a massive international tour that kicked off on September 17 in Melbourne, Australia and continues through Australia, New Zealand, Canada, UK, and Europe. The trek will feature special guests Restless Road, Jessie James Decker, Blanco Brown and Chris Lane on select dates.

Kane also will bring the Drunk or Dreaming Tour to the United States in 2023. The trek, which features special guests Dustin Lynch, Gabby Barrett and LOCASH on select dates, will kick off in Grand Rapids, MI on March 16, 2023, and will visit 23 cities throughout the United States before wrapping up in Greenwood Village, CO at Fiddler’s Green Amphitheatre on Saturday, June 10, 2023.

While embarking on the massive U.S. headlining trek, Brown will headline Bridgestone Arena in Nashville for the first-time ever on March 31.

Visit kanebrownmusic.com for a full list of tour dates and additional information.