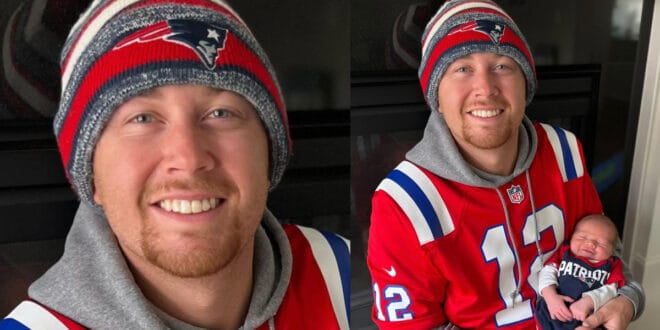 One thing is for sure. Fatherhood looks good on Scotty McCreery. After welcoming his newborn son into the world earlier this month, the “It Matters To Her” singer has been embracing his new role as a daddy.

And, he’s got cute photos to prove it!

McCreery took to his social media pages over the weekend to share what he and his now one-week-old son Avery have been up to since returning to their home from a hospital in Raleigh, North Carolina.

Turns out the little guy is already becoming a big fan of football.

A snapshot posted to McCreery’s Instagram page on Sunday (Oct. 30) shows the father and son decked out in New England Patriots gear with the American Idol alum sporting a Pats beanie and jersey and Avery dressed in a Pats onesie. McCreery, 29, holds his sweet bundle of joy in his arms as the wee one looks to be enjoying a comfortable nap.

“Avery’s first NFL Sunday! Go Pats, buddy!” McCreery captions the adorable post ahead of the game, which saw the New England Patriots win against the New York Jets in a final score of 22-17.

McCreery has long been a proud fan of sports, and it’s something he has not held back during his career as a country star. He has also been particular about the teams he roots for – one of which is the New England Patriots, even though he’s from North Carolina.

“Hanging with my Pops and New England Patriots guard & former NC State football great Joseph Thuney on the field at Gillette Stadium last night. Go, Patriots!!” McCreery once captioned an image that showed him enjoying time on the field with his father.

As a matter of fact, it was McCreery’s dad who initially passed his love for the New England Patriots down to him. With that said, there’s no doubt getting to introduce his first kid to the team made for a special bonding moment for McCreery – one he will likely hold forever in his heart.

And, thanks to his love for the team, in June, the Pats returned the favor, gifting McCreery a custom baby jersey after the singer announced he and his wife Gabi (Dugal) McCreery were expecting their first child. McCreery made sure to share the gifting moment with his fans online.

“Baby’s first jersey!!!” He captioned a post on Facebook, showing off the blue-colored child-size jersey featuring the number 1 spread across the back.

McCreery and Gabi, who tied the knot in 2018, announced their baby boy’s arrival with a joint post on Instagram.

“Never known a love like this🥹 Merrick Avery McCreery joined us 11 days early on October 24th at 4:34 a.m.! 7 lbs., 13 oz. of nothin but love💙,” the couple captioned in regards to Avery’s arrival. “Thank y’all for all of your prayers during this exciting season of life! Healthy baby and a healthy mama! Praise God🙌🏼🙏🏼.”

McCreery is currently on “paternity leave.” He is scheduled to perform a show on November 30 in Las Vegas, NV at the Downtown Hoedown on Fremont Street.

Previous Morgan Wallen’s Next Single At Country Radio Is “Thought You Should Know,” A Song That Honors His Mother Lesli
Next HARDY Marries Caleigh Ryan: See The Star-Studded Wedding Guest List 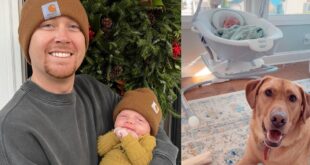 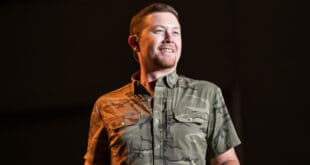