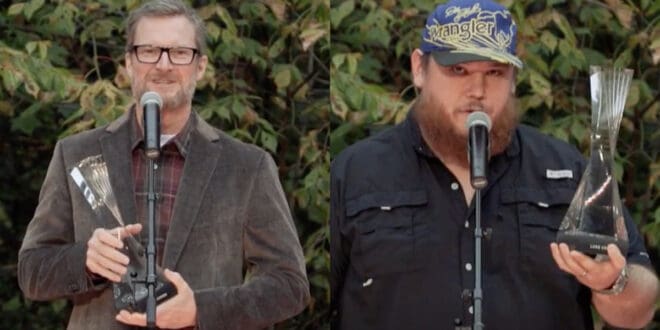 NASCAR Legend Dale Earnhardt Jr. Presents Luke Combs With CMT Artist Of The Year Award: “What A Year He’s Had”

Luke Combs was unable to attend the 2022 CMT Artists of the Year celebration, however, he was able to accept the honor from a distance alongside his friend, Dale Earnhardt Jr.

Dale Jr. appeared from his home in North Carolina to present the country superstar with the award.

“It’s great to be a part of the CMT Artists Of The Year show. I wish my buddy Luke Combs and I could be there tonight, but he’s here at my house helping the Dale Jr. Foundation raise money to support children and families in need,” Dale Jr. said via video.

He went on to praise Combs’ success throughout the past year as he listed out his various accomplishments.

“We love Luke and we love his music and boy, what a year he’s had. He landed his record-breaking, 14th consecutive No. 1 and he just finished headlining his first headlining stadium tour, selling out shows all over the country. Now, he’s going to take that live show all over the world, but his biggest success this year wasn’t the No. 1 hits. It was his child. Congratulations on being a new dad, Luke. Please welcome one of the 2022 CMT Artists Of The Year, Luke Combs.”

Combs appeared in the video clip and delivered a short, but sweet, acceptance speech.

Following the award presentation, Combs’ future tour mate, Riley Green, performed “The Kind Of Love We Make” in his honor.

With his guitar in hand, Green took to the Schermerhorn Symphony Center stage and belted out the lyrics of the sultry country song.

“Let’s get some candles burnin’/ And some records turnin’/ All the lights down low/ Take it nice and slow/ The way your body’s movin’/ Keep doin’ what you’re doin’/ To me all night long/ Writin’ our love song/ Girl, I want it, gotta have it/ Let the passion take us to a higher place/ Makin’ the kind of love we make,” he sang.

Riley Green will soon join Combs on the road for his 2023 World Tour.