Maren Morris is one of the hottest celebrities in country music today. So, it comes as no surprise that she has earned a nomination at the 2022 CMA Awards. Despite being up for a trophy, Morris says she isn’t quite sure she will attend the star-studded awards ceremony in November.

Morris, 32, recently got into a very public spat with fellow country star Jason Aldean’s wife, Brittany Aldean. On Aug. 23, Brittany, a beauty brand ambassador and social media influencer, uploaded a video of herself to Instagram. The clip, which shows her applying makeup to her bare face, is set to Beyoncé’s 2006 song “Upgrade U” and includes the caption, “I’d really like to thank my parents for not changing my gender when I went through my tomboy phase. I love this girly life.”

The alleged transphobic post, seen by Brittany’s more than 2 million followers on Instagram, put her under fire and immediately started an online feud between her and members of the country music community, including Morris.

Morris, who has openly shared her support for the LGBTQ+ community, eventually went on to sell T-shirts for a cause, featuring the words “Lunatic Country Music Person” spread across the front in response to a tagline that appeared beneath a photo of her on Tucker Carlson Tonight on Fox News. Those T-shirts have since raised over $150,000 for Trans Lifeline and GLAAD’s Transgender Media Program. (Brittany, who guest-starred on the same Tucker Carlson Tonight episode to speak out on the online feud, also released a Barbie-inspired line that featured the words, “Don’t Tread On Our Kids,” spread across the front).

In the wake of the events surrounding the heated social media exchange between her and Brittany, Morris, who is up for the coveted CMA Album of the Year award for her current album, Humble Quest, admitted that she doesn’t feel comfortable taking part in the 2022 CMA Awards. However, she says it is possible she might attend the show, despite the fact that events like those tend to make her feel “awkward.”

“Honestly, I haven’t decided if I’m gonna go. I’m very honored that my record is nominated,” Morris said in a recent interview with the Los Angeles Times. “But I don’t know if I feel [at] home there right now. So many people I love will be in that room, and maybe I’ll make a game-time decision and go. But as of right now, I don’t feel comfortable going.”

She continued, “I think I was more sad going last year. Some nights are fun. Others I’m just crawling out of my skin. I’m not good at those events because I’m awkward. But this time I kind of feel peaceful at the notion of not going.”

Reflecting on her initial Tweet that set off her feud with Brittany, Morris told the outlet that she didn’t run her reaction by anyone first.

“It’s so easy to, like, not be a scumbag human?” Morris, wrote in response to a Tweet on Cassadee Pope’s Twitter page, at the time – later referring to Brittany as “Insurrection Barbie.”

“I just shot it off. I hate feeling like I need to be the hall monitor of treating people like human beings in country music. It’s exhausting. But there’s a very insidious culture of people feeling very comfortable being transphobic and homophobic and racist, and they can wrap it in a joke, and no one will ever call them out for it. It just becomes normal for people to behave like that,” Morris shared.

“I don’t have feelings of kindness when it comes to humans being made fun of for questioning their identity, especially kids,” the singer, who said she does not consider either her or Brittany victims in the situation, added. “The whole ‘When they go low, we go high’ thing doesn’t work with these people. Any resistance movement is not done with kind words. And there are a lot worse things I could’ve called her [than ‘Insurrection Barbie’].”

Even though Morris has remained vocal over her stance surrounding the drama, she said she does not believe she’s “lost any fans,” amid the saga.

“I don’t think I lost any fans over this…. I’ve been very clear from the get-go,” Morris, who is married to fellow country star Ryan Hurd said. “It sucks when artists stay quiet, stay quiet, stay quiet and then they finally reach their breaking point and have to say something because something is so unjust or disgusting. And then they lose half their crowd because they stayed quiet. I try to tell my husband this, because he’s still building: Let people know where you stand. The ones who don’t get it will fall away, but the ones that stick with you will know what they’re contributing to.”

The 56th Annual CMA Awards, hosted by Luke Bryan with Peyton Manning, will air live from Bridgestone Arena in Downtown Nashville on Wednesday, Nov. 9 at 8/7c on ABC. 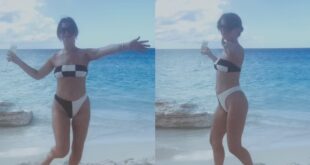 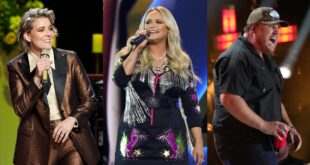