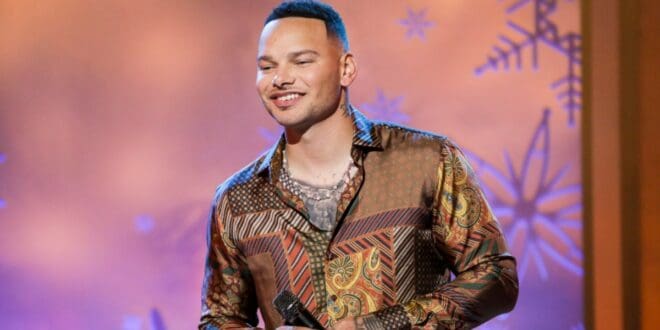 Kane Brown Says Next Single Is “Very, Very Rock… [With] A Little Swag To It,” Postpones Release Of New Album

Country music hitmaker Kane Brown recently joined Kelleigh Bannen for the year-end episode of Today’s Country Radio on Apple Music Country. During his time on the show, the hitmaker teased new music that is currently up his sleeve. However, the megastar also got vulnerable and broke his silence about his internal struggles with anxiety and depression, admitting he also goes through it and letting fans know, “you’re not alone.”

Since the release of his 2018 record, Experiment – Brown fans have been crossing their fingers and patiently waiting for a fresh full-fledged album. Throughout the years, the “One Mississippi” singer has pushed the boundaries of mainstream country music and rubbed elbows with artists outside the genre to introduce country music fans to a fresh new sound that is Brown’s own.

Brown’s collaboration with Grammy award-winning R&B artist H.E.R. for “Blessed & Free” and his work with Chris Young on the Platinum country-pop single, “Famous Friends,” proves that he is not afraid to challenge his musical limits in order to elevate his craft.

Therefore, when it was time to create new music in the studio for his forthcoming LP – Brown did not hesitate to incorporate a diverse array of musical elements that are rare to hear in a traditional country tune. “I got a song called ‘Go Around,’” the multi-platinum artist tells show host Kelleigh Bannen. “It’ll probably be my next release, and it’s very, very rock. I guess I would say rock, very heavy guitars, but a little swag to it,” he adds before opening up about another anthem that will be included in the highly-anticipated project.

During the hour-long interview, he continued to explain that he decided to push back the album’s release date because he wanted to play around with different styles and make each ballad different from one another. “I will say I pushed it back literally the other day. I think I am going to release songs hopefully once every other month leading up to it,” he shared. “None of them sound the same, which is another thing that I’ve been thinking about.”

For instance, Brown got creative with his unreleased violin-infused track “The Devil Don’t Even Bother,” which serves as a friendly nod to the Charlie Daniels Band chart-topping classic, “The Devil Went Down to Georgia.” “It sounds super… I’d probably say, like, the ‘80s, maybe for the verses, but then when you get to the chorus, it completely turns into the modern-day country,” he concludes full of excitement.

While experimenting and working his magic in the studio, he disclosed that he faced several tough decisions when selecting between tracks to include on the project. “I have another song that I’ve been fighting with going with the demo route or going with the one that [producer] Dann Huff did. Which, he killed it, but I made him make it super Motown. So, it’s just super Motown, a bunch of strings,” Brown confessed. “It’s like, ‘Is this too much? Or do I go to demo that’s basically straightforward Kane Brown?”

Watch the full interview with Brown below.

As the album release date remains still up in the air, Brown confirmed that fans could possibly expect to see unreleased songs – “Riot,” “Nothing ‘Bout Loving You I’d Change,” “Drunk Or Dreaming,” and more on the carefully crafted collection.

When Brown was not dominating the stage on his headlining Blessed & Free Tour alongside Jordan Davis, Chase Rice, and Restless Road – the music trailblazer was taking to social media to give fans a quick taste of what to expect from him in the following months. “I can’t give away too much yet on the new music, but I def want to keep pushing myself and making music for my fans,” Brown exclusively told Music Mayhem. “I think it will surprise people, but it’s still me.”

Days after talking with Bannen, Brown shared another unreleased song to social media on Tuesday (Dec. 21). While he didn’t share the name of the track, he did allow fans to hear a 46-second clip of it before deleting it from his profile, and it seems they are loving its unique sound.

Luckily, one fan page recorded the clip and shared it for fans to hear, which you can watch below.

The upcoming 12-15 piece project will follow Brown’s ACM-nominated EP, Mixtape Vol. 1. – which was released in August 2021 via RCA Nashville/Zone 4. The EP has gone on to earn several hit singles including “Cool Again,” “Worldwide Beautiful” “Worship You” and his Top 40 radio single, “Be Like That” featuring Khalid and Swae Lee.

Additionally, the “Worship You” singer is currently in the midst of his massive headlining ‘Blessed & Free Tour.’ The tour kicked off on October 1 in Sacramento and is set to visit all 29 NBA basketball arenas throughout 2021 and 2022. Brown marks the first country artist in history to headline every NBA basketball arena on a single tour.

Fans still have the opportunity to snag a ticket to Brown’s N.B.A. basketball arena tour and hear his fan-favorite hits live through February 2022.