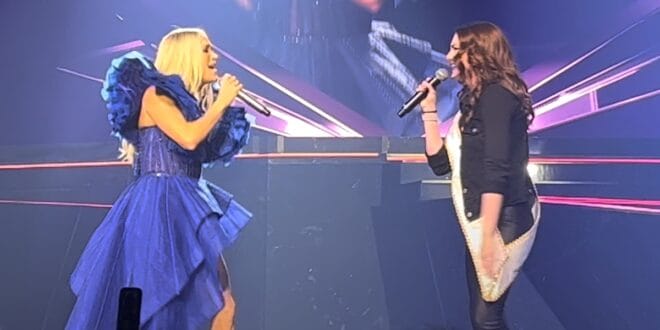 What happens in Vegas stays in Vegas… unless you share a stage with country music sensation, Carrie Underwood.

On December 1, the Oklahoma native and powerhouse singer kicked off REFLECTION: The Las Vegas Residency at The Theatre at Resorts World Las Vegas.

Since opening night, the superstar has been blowing concert-goers away with her astonishing vocals and an extraordinary production that created some breathtaking visuals – making for a must-see show in Sin City.

After country music fans filled into the seats of the world-class theatre, Underwood decided to turn the lights on and engage with her high-energy, enthusiastic audience on a personal level. Dressed to the nines in a show-stopping electric blue ball gown, the multi-platinum artist asked a Las Vegas native named Megan to join her on stage under the spotlight to sing her chart-topping track “All American Girl” on December 8.

Co-written by Underwood alongside Ashley Gorley and Kelley Lovelace, “All American Girl” is the second single from the country hitmaker’s second studio album, Carnival Ride, which was released nearly 15 years ago.

Before inviting the fan on stage, she explained to the audience why she wanted to sing the early 2000s’ hit with someone celebrating a life milestone. “Way back when this song came out, I would oftentimes invite a little girl on stage to sing it with me,” shared Underwood.

“When we were putting this show together, we got to thinking, and those little girls are all grown up. They could be doing lots of things, making the world a better place. They could be in college, they could be in Vegas, perhaps on a bachelorette weekend. I hear this is the popular place for the bachelorettes to go,” she added with a laugh.

Before she could finish her sentence, brides-to-be and their “I do” crews started to create commotion as they excitedly jumped around in their seats. The GRAMMY-award winning superstar continued to share, that she also celebrated her last few nights as a single lady partying on the rowdy streets of Vegas. “I had my own Bachelorette party right here,” Underwood revealed. Therefore, she wanted to help create a memory that would last forever for one lucky bachelorette.

“Would one of you maybe like to come up and sing with me?” she asked while looking out to the roaring crowd. “I see a bunch of girls jumping up and down over here. I think we got a bachelorette party over here, come on up,” she adds. Here she comes, she’s got her sash, every Bachelorette needs a sash. Come on up here young lady.”

In a blink of an eye, Megan, who will be getting hitched in November 2022, was strutting onto the stage with a white bachelorette sash across her chest and a microphone in hand. When Megan met the talented songstress center stage, she instantly asked, “do you know the words to ‘All American Girl,’ I got you just in case. Give it up for Megan, everybody,” Underwood said before exploding into a duet with the fan.

As they took turns tackling verses and harmonizing, Underwood recognized her strong pipes and took a second to step back and say, “Megan can sing.” The two finished off the toe-tapping track strong and embraced in a genuine hug as their performance together concluded.

“Congratulations and good luck with the wedding,” the critically acclaimed singer said before the fan exited the stage.

The star-studded show will return to Vegas in March and May. Check out the upcoming dates and snag your tickets now HERE.

Previous Luke Combs Pens Heartfelt Message To Fans, Says He Is Taking A Few Weeks Off Then Putting “Finishing Touches On LC3”
Next Kane Brown Says Next Single Is “Very, Very Rock… [With] A Little Swag To It,” Postpones Release Of New Album