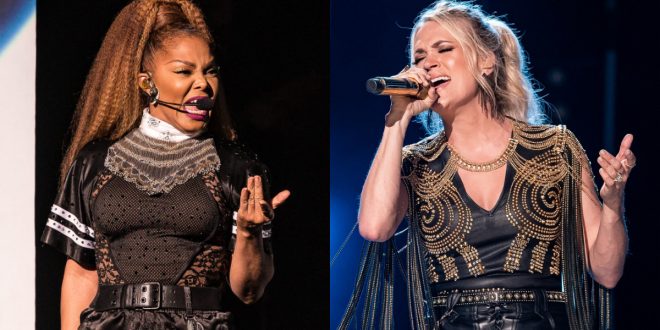 Carrie Underwood is a big fan of Janet Jackson and shared a once-in-a-lifetime moment with her during a concert.

In a recent interview with Kelly Clarkson on The Kelly Clarkson Show, Underwood told Clarkson about an experience at a Janet Jackson concert that she will never forget.

In June 2019, Underwood and Jackson both performed on Glastonbury Festival in Pilton, Somerset, England and although Underwood had the option to get on her jet and head back home after her performance, she chose to stay to watch fellow superstar Janet Jackson’s set.

“Tell me about being backstage at this Janet Jackson concert when she blew you a kiss cause that’s amazing. Like I didn’t know you were a Janet fan and I really want to go do that with you, karaoke that with you,” Clarkson said.

She explained that they both were billed on the Glastonbury Festival and she couldn’t miss out on seeing her set that evening, but never expected to have a side stage view of the show and have Jackson herself notice her and blow her a kiss.

“Well, we actually both played Glastonbury and I stayed to watch her, we could’ve jetted out but I was like oh Janet Jackson’s on the bill, I want to stay and check her out,” Underwood explained to Clarkson. “We just had kind of prime seating and she blew me a kiss and I’m like looking around like what who is she blowing a kiss to and they’re like, it’s you, it’s you, blow a kiss back and I was like I froze, I froze and then she starts walking the other way.”

Underwood then humbly replied explaining that she didn’t “even know” that Jackson would know she she is “alive.”

“I completely froze cause I didn’t believe that Janet Jackson would even know that I am alive.”

Clarkson added: “I love that you still feel that too, like so many years in the business and you still get excited like that.”

You can watch the memorable moment below in a clip that Underwood was able to capture during the show.

During the show Underwood also explained how she and her husband, Mike Fisher, first met.

Underwood released her first-ever No.1 Christmas album, My Gift, earlier this year, which you can pick up HERE. She also just-released a visual special of the record with an HBO Max Special. During the holiday special, she performs traditional favorites and new holiday classics. She also was featured on her first bilingual song entitled “Tears Of Gold” with David Bisbal.