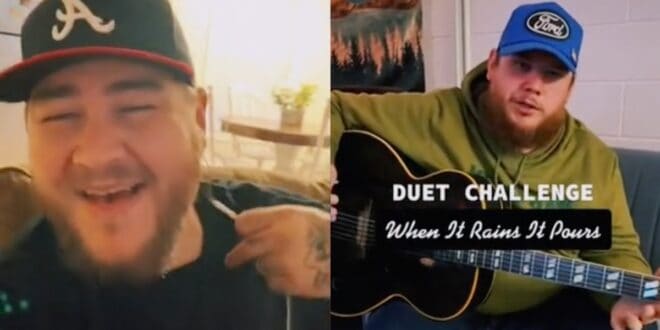 Bear Bailey and Luke Combs voices blended together so well!

The viral gas station singer shared a virtual duet on Sunday (Aug. 22) with the reigning CMA Entertainer Of The Year on TikTok, singing Combs’s chart-topping hit, “When It Rains It Pours.”

Combs shared a video on TikTok of himself singing the hit single “When It Rains It Pour,” a track released in June 2017 as the second single from Combs’ debut album, This One’s For You. In the clip shared by Combs dubbed ‘The Duet Challenge,’ he asked viewers to duet the video singing certain verses of the song before joining him to harmonize during the chorus. Lyrics highlighted in green are for the viewer to sing, while blue is Combs’ parts and then the lyrics highlighted in red are for both the viewer and Combs to sing together.

“DUET THIS: When It Rains It Pours. Y’all tag me in your duets using #FordDuetChallenge & I’ll reply to some of my favorites,” Combs captioned the clip, which you can watch below.

DUET THIS: When It Rains It Pours. Y’all tag me in your duets using #FordDuetChallenge & I’ll reply to some of my favorites. #duetwithme #lukecombs

Less than 24 hours later, Bailey seen the challenge and recorded his submission video.

“#duet with Luke Combs. Now this was fun and such a great song!” Bailey captioned his duet video.

Bailey, who was sitting in his house on the couch, sang the hit song which sounded flawless as he and Combs’ vocals blended together flawlessly throughout the brief clip.

“Luke, I’ve been waiting on you to do one of these for a while man,” Bailey said prior to singing with Combs.

#duet with @lukecombs now this was fun and such a great song! #cover #fyp #foryou #countrymusic #happyholidays #unity #love #letmeknow

Bailey previously shared an epic TikTok duet with country superstar Tim McGraw, which earned praise by viewers and even caught the attention of McGraw himself.

Additionally, James “Bear” Bailey, known by his TikTok handle, @bearbaily1, has been impressing people at a Super Serve gas station near Houma, Louisiana, with impromptu performances of songs by artists from all different genres. Bailey’s performances, which have since been uploaded to his TikTok page, have made him a viral star. In fact, he has amassed over 2 million followers already!

With each impressive clip, viewers can find Bailey – a 33-year-old welder – typically standing near the checkout counter in a rock-band T-shirt, either singing along with the gas station loudspeaker or belting out an a cappella tune. His near-flawless renditions of songs by artists such as Luke Combs, Lonestar, O Town and Shania Twain, to name a few, have left store patrons stunned. So much so that they often stop in their tracks, dance along to his performances, or – as seen in other clips – return to the gas station to find Bailey offering onlookers yet another on-the-spot rendition of their favorite tune.

Thanks to the popular TikTok platform, Bailey has been grasping attention from some of country music’s biggest stars. Mickey Guyton, who saw Bailey’s gas-station performance of K-CI & Jojo’s “All My Life,” re-tweeted the clip, showing her enthusiasm for Bailey’s talent with the simple caption, “I Can’t.” While country superstar Keith Urban has also taken an interest in Bailey’s work in the recent months, responding via Twitter to one of his video cover performances of Urban’s 2009 smash, “‘Til Summer Comes Around,” with three love hand gesture emojis. Even Dan + Shay got in on the excitement, commenting on a video from their own TikTok account, raving, “killed it, Man!”

More recently, Bailey has garnered the attention of Clay Walker, who invited him to come perform on stage with him some day.

The fast rising country singer has also recently gained attention globally and especially noted in Music City as he gears up to release original music. He has shared several teaser clips of original songs, including “Let It Roll,” “I Can’t Stop Loving You,” and “Mamas Boy,” which he wrote alongside Mitchel Tenpenny.

See a list of 10 country covers that truly impressed us by Bear Bailey HERE.