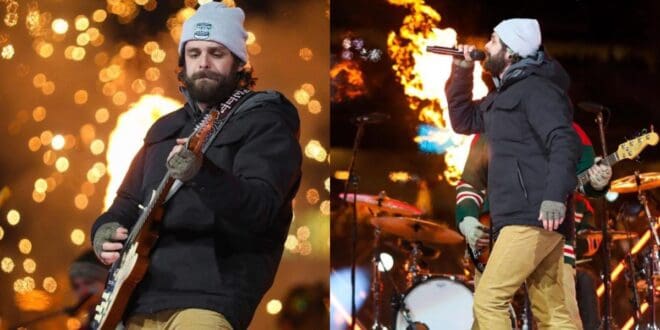 After ringing in the New Year with a sold-out concert at Xcel Energy Center in Minneapolis, Thomas Rhett kicked off 2022 with his first televised performance of the year at the 2022 Discover NHL Winter Classic. The NHL Winter Classic featured an outdoor hockey matchup between the Minnesota Wild and St. Louis Blues.

The country superstar performed a two of his hit songs at Target Field in Minneapolis, including his seventeenth No. 1 hit, “What’s Your Country Song?” and “T-Shirt,” a fan-favorite hit co-written by Ashley Gorley, Luke Laird, and Shane McAnally that appears on his second studio album, Tangled Up (2015).

“Welcome to the Winter Classic y’all,” Rhett, 31, said as he entered the stage. “My names Thomas Rhett, thanks so much for having us out here tonight,” he added before kicking off his set with his chart-topping single, “What’s Your Country Song?”

Despite the bone-chilling temperatures in Minnesota during his set, Rhett powered through the bitter cold and gave an electrifying performance, complete with pyrotechnics, fireworks, a vibrant lighting rig and a pair of hit songs.

Watch his full performance, courtesy of NHL, below.

What's Your Country Song and T-shirt by @ThomasRhett at the #WinterClassic had us like: 😍 pic.twitter.com/WZH44qXIhM

“That was fun… Cold… but fun! Haha,” Rhett shared in his Instagram stories. “Thanks for having me, NHL!”

On Sunday (Jan. 2), just one day after his show-stopping performance at Target Field, Rhett took to Instagram to share photos from the event.

“Thanks to everyone for staying and listening to us play in -10 degree weather last night!” Rhett captioned a series of photos, captured by photographer Aaron Davis, from the event. “[the] Coldest hockey game in @NHL history. Wow. Love y’all!!”

Ahead of his headlining performance on New Year’s Day, Rhett sat down for a virtual conversation with Minnesota Wild radio voice, Joe O’Donnell, to discuss his participation.

“Dude, when we got asked to do this, it was just like the most epic ask in the world,” Rhett said. “Minneapolis and St. Paul has always been one of my favorite places in America to play.”

Rhett continued, “I feel like I’ve played every bar and club in that town and the Xcel Energy Center in 2018 was the very first arena that I’ve ever sold out, and so I’ve got a lot of memories in that arena. So, getting to play that New Year’s Eve with the band and then getting to play Winter Classic the next day is huge for us.”

Rhett, who recently welcomed his fourth daughter with wife Lauren Akins, is gearing up to release two brand-new albums this year.

In addition to releasing new music, Rhett is also set to perform at several festivals throughout the year, including Tortuga Music Festival and Stagecoach. For a full list of upcoming tour dates, click HERE.

Previous See Inside Kenny Chesney’s Stunning Tennessee Villa — Sold For $11.5 Million
Next Donald Trump Introduces Jason Aldean As “No. 1 In The World,” Dubs Brittany Aldean “MAGA All The Way” 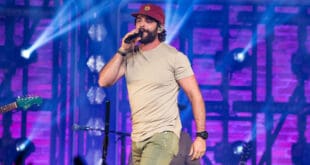