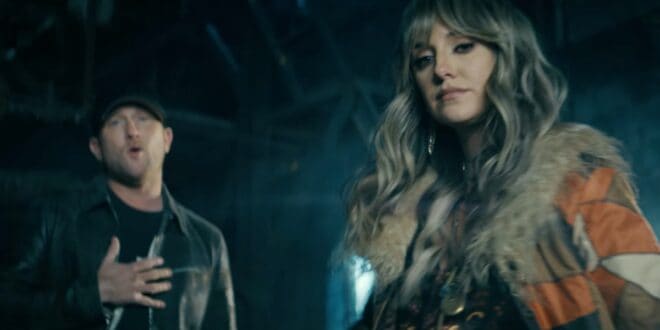 Cole Swindell and Lainey Wilson are taking their fiery new duet to the next level with the release of a cinematic new music video that brings “Never Say Never” to life.

The Grammy-nominated superstar and fast-rising singer/songwriter appear in the performance portions of the clip, while actors portray the storyline.

Directed by FlyHi Films’ Michael Monaco, the clip follows the story of a forbidden relationship of a prison guard who finds unexpected love with an inmate. As the clip continues, the prison guard helps her lover escape from imprisonment.

Later in the video, as authorities go on a man hunt for the pair, the couple is caught red-handed in the middle of a wooded area sharing a kiss, before they got arrested.

The music video was filmed just outside of Knoxville at the Brushy Mountain State Penitentiary.

Watch the video below.

The country superstars released the duet on Thursday (Nov. 18).

With an irresistible melody that begs for radio airplay and catchy song lyrics, “Never Say Never” will quickly become a fan-favorite hit. The just-released song finds the two singers trading verses before flawlessly blending their unique vocals together during the chorus, making for the perfect pairing.

The arena-ready anthem, which is destined to prompt massive singalongs during live shows, is bound to become Swindell and Wilson’s next chart-topping hit.

“I wrote ‘Never Say Never’ with Jessi Alexander and Chase McGill in 2018 about a relationship you just can’t stay away from,” Swindell said. “I have been a fan of Lainey Wilson’s for a while now and what she brings to this song is everything it needed. So glad it’s finally out!”

“’Things a Man Oughta Know’ was such an incredible ride, I can’t wait to get this next song out into the world and see where it leads,” Wilson added. “It makes the journey that much more special that I get to share it with a friend this time around—I’m looking forward to playing it for y’all, and I’m sure Cole is too!”

The song also marks the follow-up to Wilson’s first-ever No. 1 single, “Things A Man Oughta Know.”