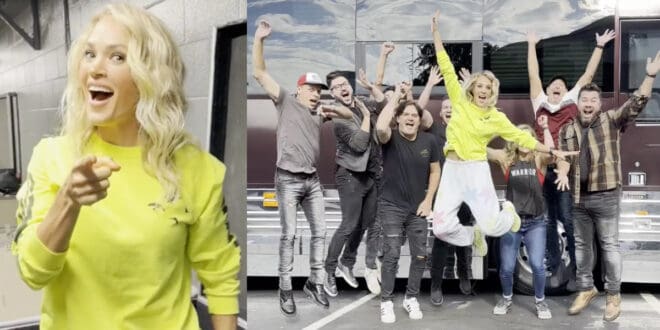 Carrie Underwood is gearing up for her highly anticipated upcoming The Denim & Rhinestones Tour. And she’s getting eager “care bears” ready with a light-hearted video!

On Wednesday (Oct. 12) morning, the eight-time Grammy Award-winning artist took to TikTok to introduce folks to her bandmates, which includes a cast of eight road warriors – nine if you’re counting Underwood. The “Hate My Heart” singer got clever with her introduction video utilizing the theme song from the popular ‘90s sitcom Full House, which ran from 1987-1995 on ABC.

Back for another season of Full Bus starting this Saturday! Meet the cast! #RoadLife #LoveMyBand #DenimAndRhinestonesTour 💜💎

The video begins with the whole touring crew running away from their bus before segueing into Underwood’s first introduction, her best friend, Ivy Childers’s husband, Mark Childers, who plays bass and is also the musical director for the star. Fans then get to meet the faces of names like Jordan, Matt, Scott, Sydni, Seth, Chad, and Ed – all of which play an instrumental role in making sure Underwood’s tours run smoothly.

“Back for another season of Full Bus starting this Saturday! Meet the cast! #RoadLife #LoveMyBand #DenimAndRhinestonesTour 💜💎,” Underwood captions the clip.

Underwood has been busy in rehearsals in recent days getting ready for her trek. And she’s been counting down the days while sharing various glimpses of what fans can expect from the 43-city The Denim & Rhinestones tour leading up to the big opening day.

Another video on TikTok features Underwood in rehearsals practicing her performance of her current single, “I Hate My Heart,” which she penned alongside frequent collaborators Hillary Lindsey and David Garcia and fellow country hitmaker Hardy. The anthemic tune is her second offering from her Denim & Rhinestones album.

So excited to rock out to my next single “Hate My Heart” LIVE on tour starting this Saturday! This was such a fun song to create with Hillary Lindsey, David Garcia, and @Hardy!  #DenimAndRhinestonesTour 💜💎 #HateMyHeart 😡❤️

“So excited to rock out to my next single, “Hate My Heart” LIVE on tour starting this Saturday! This was such a fun song to create with Hillary Lindsey, David Garcia, and @Hardy! #DenimAndRhinestonesTour 💜💎 #HateMyHeart 😡❤️,” Underwood wrote in her post.

“‘Hate My Heart’ was part of my desire to have fun on this album,” Underwood shared of her current single in a recent statement. “I wanted songs that would be exciting to perform live and would fill up an arena, and that’s exactly what we’re about to do with The Denim & Rhinestones Tour. This one is definitely going to get everyone up on their feet and having a good time. It was great writing ‘Hate My Heart’ with Hillary Lindsey and David Garcia, who I love collaborating with, and also getting to work with Hardy, who brought a cool vibe and energy to the track.”

The Denim & Rhinestones tour, which features special guest Jimmie Allen, will begin on Oct. 15 with its first show in Greenville, South Carolina. Tour dates will continue through the fall and into early 2023.