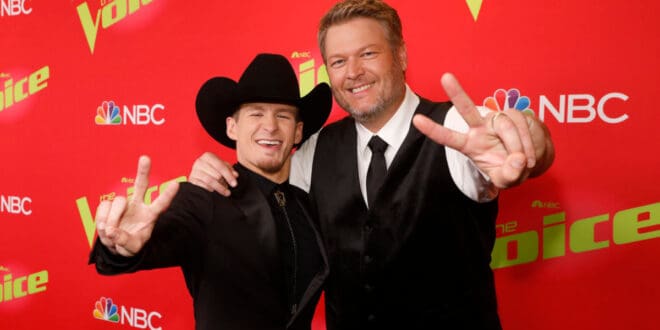 In a recent interview with Music Mayhem, Leatherwood opened up about his time on the reality TV competition series and spoke highly of his friendship with long-running coach Blake Shelton after representing his team throughout the season. Leatherwood said he enjoyed being coached by the “No Body” singer and calls it “the greatest experience I could have ever asked for.”

“Getting to know Blake was a dream come true. He is a class act. He’s a great guy and what you see is what you get,” Leatherwood said. “That’s the greatest experience I could have ever asked for was to, I mean, be with THE Blake Shelton, hanging out and talking about music. [It] doesn’t get much better than that. So I’m just very blessed to say that I’m a good friend of Blake’s now.”

The heated competition show primarily focuses on the backgrounds of participants, the mentor-mentee relationships between promising artists and their coaches, the tireless rehearsals and demanding rounds (battles, knockouts). But, Leatherwood says behind the scenes, his relationship with Shelton has been nothing short of pure joy with lots of laughs.

“When we were off camera, we were just joking around, telling stories, telling secrets, telling lies, telling funny jokes, and just cutting up because I mean it’s a whole bunch of fun out here on The Voice,” Leatherwood shared. “I’m very glad I can say that [I] and Blake had a great relationship and that’s my man. That’s my dude. He is a brother [and] a friend for life, so [I’m] very, very happy to call him my mentor.”

Will Bryce Leatherwood Perform At Ole Red In The Near Future?

Bryce Leatherwood’s win on The Voice granted him the grand prize of $100,000 and a record deal with Universal Music Group. But, as with many other acts, he is now having to find his footing off the show he built his career on. He says he has been chatting with Shelton about potentially taking up a residency at the superstar’s famous Ole Red bar in Tishomingo, Oklahoma.

“[I] and Blake have been talking about that together. He is like, ‘Well, I don’t know if [we] can afford you.’ I was like, ‘Well, it isn’t about money, man. It’s about the help that you’ve done for me.’ So we’re going to figure out something,” he said. “My love for music stems from playing live. So like I said, I’ve never released music. I’ve written music, but I’ve never released any. And my goal is pretty simple, just to go out there and play shows for people and make people happy.”

Even though Leatherwood admits that he has yet to release music in a professional setting, he is confident if he ever asked Shelton to duet on a song with him, the 46-year-old heavy hitter wouldn’t turn him down.

“I believe if I gave Blake a simple phone call one day and just said, ‘Hey man. I got this song. Just let me know what you think about it. I think you’d sound good in the second verse. You wanna cut it with me?’ He’d say, ‘yeah.’ ‘Cause that’s Blake. Blake wants what’s best for his singers and the people that he’s impacted.”

For now, Shelton is busy working on his own change in direction as he heads into his final run as a coach when The Voice returns for season 23. Shelton is also in the midst of co-hosting a brand new game show called Barmageddon alongside fellow The Voice co-star Carson Daly and Nikki Bella. The competition show, which premiered on Dec. 5, 2022, on the USA Network, is filmed inside Shelton’s Nashville Ole Red location and features celebrity guests participating in hilarious bar-related challenges.

When asked if he’d ever compete against Shelton on Barmageddon, Leatherwood says, “Oh absolutely. He stands no chance. That’s it. I mean, I told him, he is like, he’s delusional. He thinks he could actually beat me in all these games, and I’m going to go in there confident because I think he’s confident in himself, and I don’t know why. ‘Cause he is not good at anything. He’s not… I mean, what? He’s only a nine-time The Voice champion. I mean, it’s just disgusting. So yeah, he thinks he’s good at all these beer-drinking games like no. So, I’m ready. I’m ready. I’m ready to show whose boss.”

Barmageddon airs on Mondays at 11 p.m. ET on USA Network.

Previous Thomas Rhett Enjoys Snowy Ski Trip With Wife Lauren & Their Four Daughters: “Loved This Trip Out West!”
Next Shay Mooney Reveals The Secret To His 50+ Pound Weight Loss: “I Changed My Entire World In 6 Months” 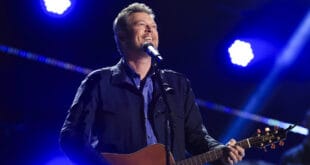 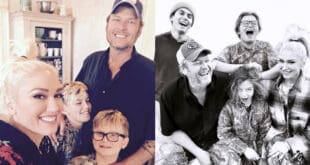 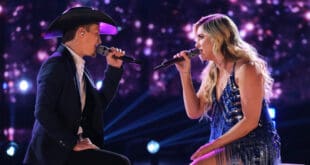