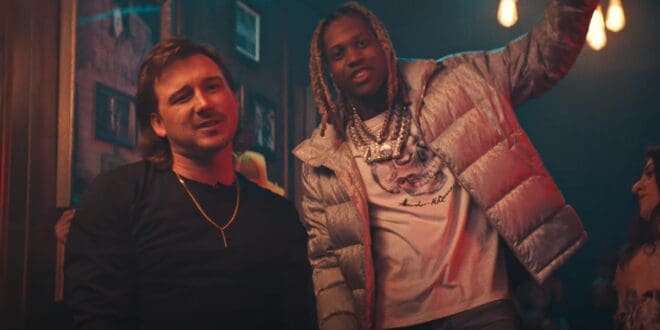 Lil Durk came to his “Broadway Girls” duet partner Morgan Wallen’s defense when being asked if he is a racist and also encouraged rappers to work with the country hitmaker.

In a video, shared by TMZ on Wednesday (Jan. 4), the Chicago rapper defended the East Tennessee native and encouraged rappers to work with the “Sand In My Boots” singer while sitting in the backseat of a car in Beverly Hills, California after being stopped by the outlet.

“Everyone is talking about your collab with Morgan Wallen, it went No. 1, it was huge. How was it working with him as you know he had the whole n-word controversy, he was in hot water. He’s not a racist is he?” the TMZ reporter asked Durk, referencing Wallen’s use of the n-word in February 2020.

“My boy,” Durk said. “He ain’t no racist. That’s my boy. We had a long talk. He had his public situation… I vouch for him and he good.”

The TMZ reporter also asked Durk if he thinks he should work with some fellow rappers, who Wallen said he’d like to collaborate with in a recent conversation on Clubhouse with comedian Druski. During the discussion with Druski, Wallen revealed that he’d like to work with Kendrick Lamar.

When Durk was asked if Lamar should work with Wallen or not, he immediately replied, “Fa sho.”

Earlier this month, Wallen appeared on Behind The Vest with Druski, where the topic of working with Lamar came up. While chatting with Druski, he said, “I do love Moneybagg… He’s definitely at the top of the list. But like overall, ever… I’m trying to think of not just in the past little bit… Kendrick Lamar would be pretty cool.”

Wallen, who is an avid Hip-Hop fan, also revealed who he is currently listening to, “Honestly, my top stuff on Spotify was all hip-hop… Moneybagg is probably my favorite. And I listened to a lot of Young Dolph – RIP. I listened to Drake’s new album. I listen to Kanye… I’ve been listening to a little bit of Gunna. I like him pretty good.”

Sonically, the song is different from anything we’ve ever heard from Wallen. While maintaining his signature deep southern twang, the superstar pushed his musical boundaries further than ever before by incorporating hip-hop elements for a fresh new sound.

The collaboration did not come as a surprise to fans, as Lil Durk gave Wallen his stamp of approval by commenting on the chart-topping hitmaker’s teaser clip, released in early October. When the teaser of “Broadway Girls” appeared on social media, the anthemic tune instantly took the internet by storm as fans begged for its release.

“Broadway Girls” is also climbing the Billboard Hot 100 chart, and currently sits at No. 30 on the chart.

The pair recently shut down Lower Broadway and Jason Aldean’s Kitchen + Rooftop Bar to film the music video for their chart-topping collaboration, which was released on Monday, December 20, 2021.

The video, directed by Jerry Productions and Justin Clough, finds Lil Durk and Wallen partying in Aldean’s bar and singing along to the track on the vacant street in Nashville, TN.