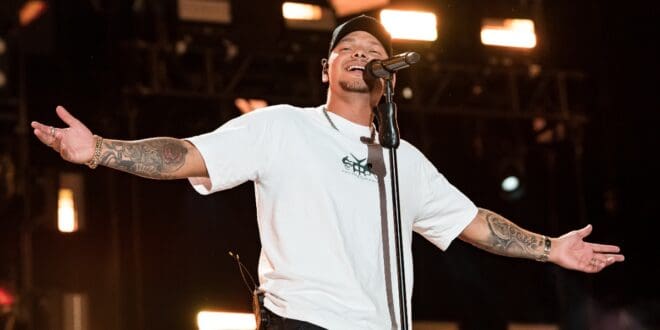 Kane Brown Would Love To Do A Rock Collaboration One Day, Says He’s A Big Fan Of Slipknot & Korn

Kane Brown may be a country artist, but that doesn’t mean he avoids other genres of music. The 28-year-old “Grand” singer recently appeared on E! News digital series Drive!, where he talked about various topics including his favorite genre outside of country music – rock.

“I’m a huge rock fan,” Brown told host Austin J. Mills, as he showed folks around the city of Nashville, Tenn. while driving around in a custom orange and black 2022 Ford Mustang Shelby GT500 Sports Car. “And when I say rock, I mean Slipknot, I mean, I’m a Green Day fan too, but I’m talking – I’m a workout fiend so, like, heavy – Slipknot, Korn, crazy stuff.”

And while Brown loves the idea of exploring the metal side of music, he doesn’t feel he could ever go full throttle and actually make it happen.

“I couldn’t. I’m not the type of guy that could do that,” Brown admitted. “I don’t have that brand.”

Despite not having that brand, Brown is no stranger to venturing outside of his genre. He has previously worked alongside such artists as rapper Swae Lee, DJ Marshmallow, and Nelly. On the countryside of things, however, he has duetted with a whole slew of other artists, including Chris Young, Lauren Alaina, Blake Shelton, and many more.

Shelton is Brown’s latest collaborator with the two teaming up on “Different Ma,” from Brown’s recently released album of the same name.

In contrast to metal, another country artist that Brown says he has his mind on for a potential duet is fellow country star, Jason Aldean.

“I’ve been trying to get him on the phone, but he keeps blowing me off,” Brown jokes.

“Jason Aldean, if you’re listening, stop blowing him off,” Mills said in response to Brown’s wishes to collaborate with Aldean.

Adding to his growing list of duets, Brown even dropped a duet featuring his wife of nearly four years, Katelyn Jae Brown. The pair finally chose to trade vocals on a song after fans begged them to sing a song together. The tune aptly titled “Thank God,” inspired by their marriage and love for each other, is also featured on Brown’s current album, Different Man.

“So me and Kate have been trying to release a song for like five years now,” Brown recently shared the story behind how he chose the song for him and his wife to sing. “And we kept getting songs coming in, we thought that you know, each of them was the song for us but it never felt right. So my buddy Josh, that’s signed to my publishing deal, sent me a song called ‘Thank God’ and I listened to it and I fell in love with it. And then kept listening to it and kept listening to it.”

Aside from talking music, Brown also walked fans through some of his favorite cars in his giant collection. Those vehicles include his 20166 Nissan GT-R, 2016 Cadillac CTS-V, and his 2007 Subaru WRX STI.