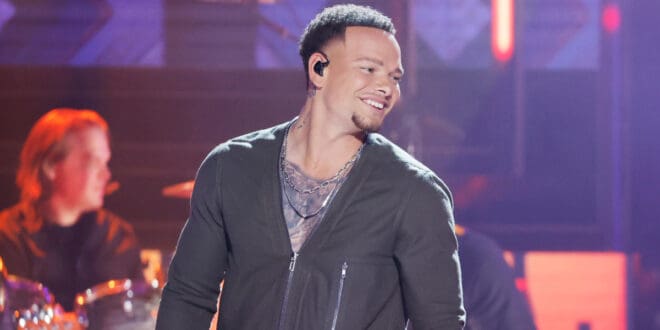 Kane Brown earned a standing ovation with his show-stopping performance of his latest chart-topping hit during the 2022 CMT Artists Of The Year celebration.

The country superstar wowed the star-studded crowd with a performance of his eighth No. 1 hit, “Like I Love Country Music,” a tune that shouts out country legends Willie Nelson, George Jones, Alan Jackson, Brooks & Dunn and compares his love for his wife to his love for country music.

Following his performance, “Thinking ‘Bout You” singer and soon-to-be tourmate Dustin Lynch took to the stage to present Brown with his CMT Artist Of The Year trophy.

Brown returned to the stage to accept the prestigious honor.

“I just want to say, thank you CMT. This is awesome. It honestly feels so amazing just to be recognized,” Brown said.

He went on to thank his wife, Katelyn Brown, who was all smiles in the crowd. The Browns’ also celebrated their fourth wedding anniversary the same day as the show’s taping.

”I want to thank my beautiful wife. It’s our [fourth] anniversary today. I love you babe,” Brown continued. “I also want to thank my team, Martha, Ken, everybody at Sony, I love all you guys, like I said I say this every year, Lainey [Wilson] said it earlier, I just feel like Nashville is our home. We’re just one big family, and that’s what I love about country music. I feel like everybody supports each other. So I love you guys, and thank y’all so much for this. See y’all.”

What a year it's been for you, @KaneBrown! 🌟