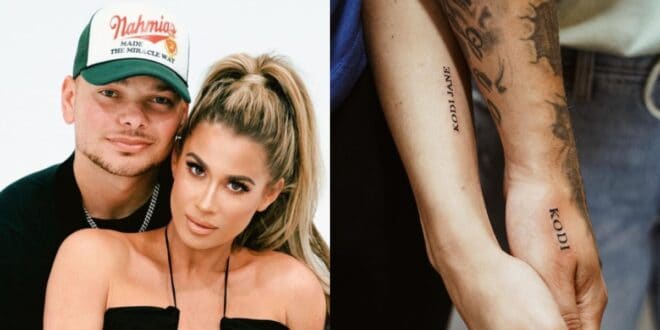 Kane Brown and his wife Katelyn Brown enlisted their longtime friend and frequent tattoo artist, Bubba Irwin, to add some ink to their forever growing collection of tattoos.

The country superstar took to Instagram on Wednesday (Jan. 26) to share that he and his wife got new tattoos of their new bundle of joy’s name.

In the photo, shared by Brown, captioned “Kodi Jane,” fans can see the beloved country couple’s new tattoos. Brown’s tattoo, which reads Kodi, lives on the side of his hand. While Katelyn’s is on her inner arm and says their second daughter’s full name, Kodi Jane.

In January 2020, the couple showed off their new ink, which is Kingsley’s name. Brown’s tattoo for his 2-year-old daughter lives on his neck, and Katelyn’s appears on her arm.

You can see some of Kane’s tattoo in the below clip, shared by Irwin.

The “One Mississippi” singer and his wife surprised fans with the announcement of the birth of their second daughter, Kodi Jane, in late December 2021.

welcome to the family Kodi Jane

If you or someone you know is interested in getting a tattoo by Bubba Irwin, you can check out his work HERE and reach him HERE or you can email him at [email protected] to book an appointment.