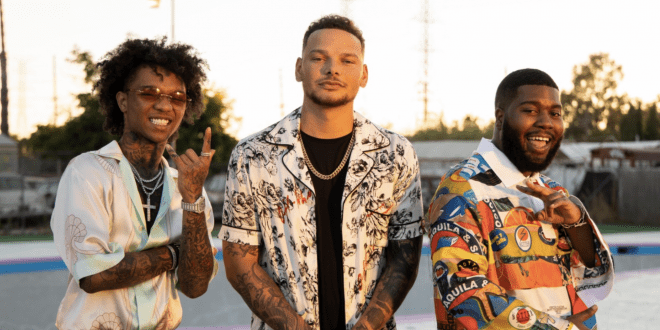 Kane Brown debuted the music video for his Top 40 hit “Be Like That” featuring R&B singer Khalid and rapper Swae Lee of duo Rae Sremmurd on Wednesday (Aug. 19).

“Be like that is officially my new favorite music video of mine,” Brown revealed earlier this month. The Alex Alvga-directed music video takes place in Sun Valley, California at an old-fashioned 1940’s hotel called The Pink Motel and Cadillac Jack’s diner (formerly known as Pink Cafe). The hotel and diner has also housed the filming of TV shows, commercials and music videos such as Christina Aguilera’s “Your Body,” Cee Lo Green’s “F*ck You,” Neon Trees’ “Everybody Talks” and a number of others.

The video finds the superstar trio singing about the possibility of a guy being better off on his own but says that he could never move on if they broke up, while also thinking that he is not himself without her.

“I might be better on my own / I hate you blowin’ up my phone / I wish I never met your ass / Sometimes it be like that / But I’m not myself the nights you’re gone / There ain’t no way I’m movin’ on / I’m not afraid to need you bad / Sometimes it be like that,” sings Brown.

“It’s about all the different feelings you can have in a relationship and trying not to overthink it,” Brown told  Billboard. “When it gets tough, you want to be on your own, but then you miss the person a second later. I think it’s something everyone goes through.”

Brown first teased the news of the “Be Like That” music video on Friday, July 31, via his Instagram story with his collaborations Khalid and Swae Lee, telling fans that they were shooting the video for the track.

“Here with my boys, we just shot it bro,” said Brown when speaking about the “Be Like That” music video.

See a brief clip of some of the music video’s behind the scenes below.