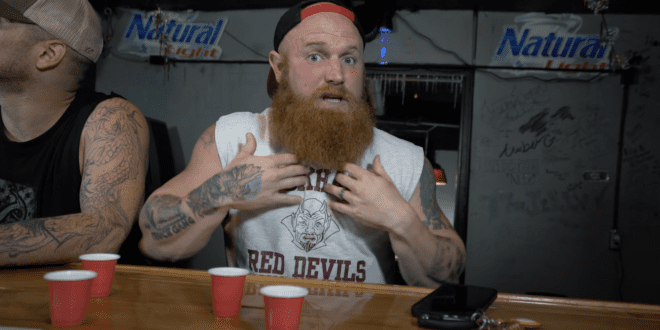 The South Carolina native rolled into the New Year poking fun at Lil Durk’s recently released “Broadway Girls,” which features megastar Morgan Wallen. The rowdy party track displays a new side of the “Sand In My Boots” singer as he pushes his musical boundaries and intertwines hip-hop elements with his deep southern twang.

Within the clip, Dirk and Wallen share a story about a girl they met at Jason Aldean’s bar in the honky-tonk town. “I met her down at Aldean’s / she said she that saw me walking in about a mile away / Bean had to take her phone and that just took her smile away / she said I’m too drunk and crazy she don’t like the way I dance / I said you don’t have to join in / she said she’d take a chance / I’ve been kind of crazy since it went down / I get kind lost and this is what I found / girls like you just want to take me around, around and around / there’s two things that you’re going to find out / they don’t love you, and they only love you right now / if I was smarter I would’ve stayed my ass at home and leave them Broadway girls alone / Broadway girls alone / Broadway girls alone…”

After hearing the lyrics of the club-ready tune, Billy called in rising country artist Brandon Hartt to join him on his hilarious rendition. Similar to his other content, the lyrics portray what it is like to be red neck. Therefore, the breakthrough star switched out “Broadway Girls” for “Redneck Girls.”

“I met her down at Applebee’s/ she was smoking menthols / said she smoked a pack a day/ use a Bud Light bottle like it was an ashtray / She gets drunk and flirty pulling down on my pants,” Billy sings in the chorus.

Billy and Hartt brought the amusing lyrics to life in an outrageous music video that illustrates their vision of a redneck female. Throughout the three-minute-long clip, the fan’s whiteness Billy handing an intoxicated girl in a small-town bar. While sipping out of red solo cup, he encourages his listeners to “leave the redneck girls alone.”

The action-packed music video immediately received attention on social media, as it garnered thousands of views on YouTube and Instagram. “Hell yes, finally a real song on us redneck girls 👏👏👏,” shared a fan in the comments. “This is so awesome and legit a banger. I’d play this with the windows down and the radio up,” said another.

As music-goers praise the comedian for his unexpected vocals and witty take on the smash hit – he took to Instagram stories to promote his live shows. The newcomer is expected to embark on his Ginger Billy’s Backwoods Comedy Tour on Saturday, January 8, in Ashland, Kentucky.

The world of comedy is new to Billy, as he recently broke into the industry full-time after the peak of the global health crisis. The decision to switch career paths was made easy for the budding comic – when somebody told him to shave his money-making beard.

“With the restrictions and all, they said that if I was going to work, I had to shave my beard,” revealed Billy to The Daily Yonder. “I make a lot more money with that beard than I do as a respiratory therapist.”

Shortly after his leap into the spotlight, he opened up about the struggles of becoming a professional comedian. “It sounds cool, but it is the most stressful thing l think I’ve ever done in my life,” he explained to the outlet. “Because every day I have people walking up to me saying, ‘Man, I love you,’ which is the coolest thing in the world to me…but the downside is that your income is based on you, that’s the thing. If I put out a video, and it doesn’t get 5 million views, I think it’s a failure. Now I’m so picky at what I put out I think I hurt myself because I will work my butt off to make a video and then be like ‘that’s not good enough.'”

Although he may be hard on himself, he has delivered premium content in the last few months. In fact, his work caught the attention of Granger Smith. Billy was recently seen hanging out with Smith’s alter ego Earl Dibbles Jr. enjoying the country life in Texas.

For any country fanatic looking to laugh the night away, tickets are currently available to purchase to see Ginger Billy live and in-person.

Previous Here’s What Miranda Lambert Song Jennifer Lawrence Would Listen To For The Rest Of Her Life
Next WATCH: Maren Morris Reminisces On Her Musical Journey In New Single “Circles Around This Town”