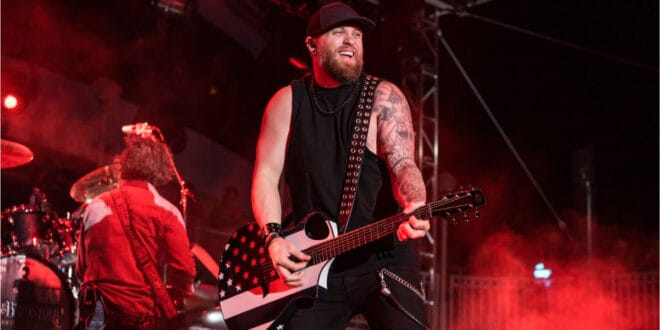 Brantley Gilbert recently revealed that he’s “California sober.” The country singer made the admission during a recent interview with Audacy’s Rob Stone and Holly Hutton.

The topic came up while Gilbert was discussing his new song, “Heaven By Then” featuring Blake Shelton and Gilbert said he was a bit “rougher” during his “drinking days.”

“To be completely honest and transparent, I have to be respectful to the folks in the recovery community that are absolutely sober,” Gilbert told Stone and Hutton. “I have to be careful with the definition of sober — I’m California sober if that makes any sense. I’m a Willie Nelson fan,” he added, implying that he still smokes marijuana.

Discussing his sobriety isn’t something new for Gilbert. He shared more about his struggles with alcohol during an episode of Today’s Country Radio with Kelleigh Bannen on Apple Music Country.

“I’m a guy that says if I say I’m going to do something, I’m going to do it or die trying. And with alcohol, it got to a point with it where I knew it was something I needed to change and cut back on and I said, ‘You know what? This has a little more control over me than I like, and I just need to get it out of my life,'” Gilbert admitted.

“And [I] couldn’t do it. Physically. That really frustrated me. Going in and being open to a different route of not being able to do it by myself was kind of humiliating and almost embarrassing to an extent, for about a split second. And then the thought was, ‘Dude, get it out of your life.'”

“I wasn’t valuing or prioritizing the things in life that I was raised to value and prioritize. This chapter of my life, I didn’t plan on making it to 30, to be completely honest. I didn’t ever think I’d be married or have kids. Like, I wanted to be a biker.”

“One night, I’ll never forget, we had when “[Country Must Be] Country Wide” went number one, we threw a little celebration out on the road. Man, I kind of looked around and had this thought. It was like, ‘Man, we’re supposed to be celebrating something that an overwhelming majority of people that try to do something with music will never accomplish experience.’ And we’re not really celebrating. We’re doing the same sh-t we do every night and it kind of got lost in… Just to getting wrapped into every day and every night being a party.”

“I went back on in the back of the bus and [made a phone call]… And that was literally a moment where I was like, ‘Hey man, let’s find some time and I need to do whatever it takes to get this junk out of my life.’ That’s kind of where that started,” he continued, giving listeners more insight into his sobriety journey.

Gilbert wound up going to rehab, but was ready to call it quits after just a few days at the treatment facility, according to Whiskey Riff. Then, he met another country singer who was also recovering from addiction: Keith Urban.

“I told [Keith Urban], ‘I don’t think I can do my job. I don’t know if I can ever play a song at my shows without being [messed] up.’ Or writing, I was worried my songs wouldn’t be the same, that I wouldn’t be on everyone else’s level,” Gilbert explained, revealing Urban had expressed similar qualms before telling him how much of a positive impact getting sober had on his life.

Following his conversation with Urban, Gilbert not only was able to give up alcohol, but he also credits the “Wild Hearts” singer with saving his life.

“If it weren’t for him, I don’t know if I’d be sober or be in this business anymore. I’d probably be dead,” he said.

Now, Gilbert is in a much better place. He married his wife Amber Cochran-Gilbert in 2015 and the pair shares two children, son, Barrett, 5, and daughter Braylen, 1.

His song, “Heaven By Then” with Shelton appears on his latest album, So Help Me God, which was released on Nov. 10.

Gilbert is currently touring with support from Five Finger Death Punch through December 17. 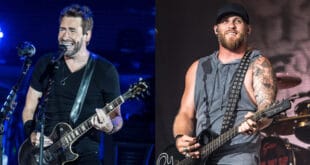 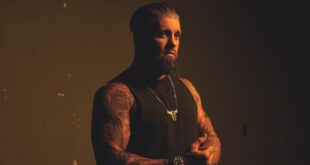 Brantley Gilbert Talks Collabs On His New Album, The Importance Of “So Help Me God” & Praises HARDY’s Authenticity 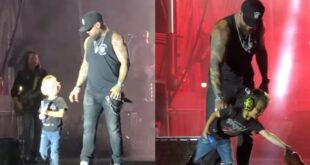