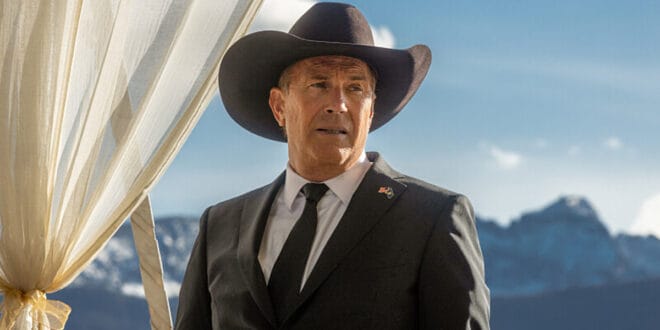 Yellowstone star Kevin Costner revealed his reason for not attending the 2023 Golden Globes, which aired on Tuesday night (Jan. 10).

The 67-year-old award-winning actor, widely known for his lead role as John Dutton in Yellowstone, took to social media ahead of the coveted awards ceremony to explain why he and his wife Christine Baumgartner were unable to attend.

Why Wasn’t Kevin Costner At The 2023 Golden Globes?

“Look, I’m so sorry for everyone who might’ve been tuning in to watch the Golden Globes,” Costner began. “Chris and I aren’t going to be able to be there,” he continued. “Yesterday, we had to pull the kids out of school in Santa Barbara. This is the second time in five years, the freeways are flooded out… We found ourselves on the wrong side of the town and we couldn’t get back to the house with the freeways closed. Nobody is sadder than us that we can’t be there at the Golden Globes.”

He went on to detail that he was really excited to walk the Golden Globes red carpet with his wife and graciously thanked his cast mates and the directors of Yellowstone.

“Chris had a beautiful dress, I looked forward to walking down the red carpet with her,” Costner added. “The people at Yellowstone and my castmates, my directors, who have been directing me and writing, and Taylor [Sheridan]. I’m just so sorry that I can’t be there, I really wanted to and I know how bad Chris wanted to support me. She went out and bought me some gold, yellow, black and silver balloons. So we’re going to sit and watch on television and see what happens.”

He concluded his statement, saying, “Thank you for your support and I’m really sorry to the Golden Globes and International Press. I hope we’re invited back, thanks.”

The Oscar-winning actor, director and producer was nominated and won the award for Best Performance by an Actor in a Television Series — Drama. He won the award for his portrayal of patriarch John Dutton on Yellowstone.

While he wasn’t in attendance at the Beverly Hilton to accept the trophy, Costner graciously took to social media to share an acceptance speech with fans after hearing the news.

“Thank you to the Hollywood Foreign Press and @goldenglobes for this tremendous honor and to the @yellowstone team for bringing John Dutton’s world to life,” Costner wrote. ”I share this recognition with my castmates, the producers, and our incredible crew. Most of all, thank you to our show’s fans, who love Yellowstone Ranch as if it were their own.”

Despite the show’s record-breaking viewership and popularity, Paramount’s Yellowstone has been subbed at most major television and film awards shows and Costner’s win marks the first Yellowstone actor to receive a Golden Globe nomination.

According to the Associated Press, at least 17 people have died due to the devastating flooding across California. Governor Gavin Newsom said that 58 counties in the state have been declared disaster areas. The flooding was caused by storms that dumped unprecedented amounts of rain throughout the state.

The mid-season finale of Yellowstone aired on January 1. After the show wrapped up, Paramount Network surprised fans with a new trailer and unveiled the much-anticipated premiere details for the remainder of season five.

Yellowstone Returns In Summer of 2023

While a specific premiere date has yet to be announced, Yellowstone viewers can look forward to the return of the show in the summer of 2023.

Yellowstone returned in November of 2022 and broke ratings with its season five premiere with more than 12 million viewers.