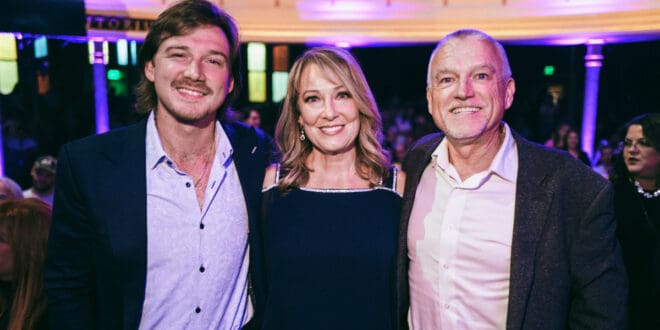 Morgan Wallen’s parents are showing their support for the country superstar by proving they’re his biggest fans at a recent concert!

Wallen, who has been touring around the country on his record-breaking Dangerous Tour, performed in Bristol, Tennessee on Saturday (Oct. 1), just miles away from his hometown of Sneedville.

The concert that was the latest edition of Country Thunder, also featured a star-studded lineup of artists, including Jason Aldean, HARDY, Lauren Alaina, Mackenzie Porter, Tracy Lawrence, Travis Tritt, Kameron Marlowe, and Ian Munsick. But it was Wallen’s mom and dad who were the real stars of the evening – at least during night two of the two-day event which saw Wallen as the headliner.

Ahead of Wallen’s show at the legendary Bristol Motor Speedway, his mom, Lesli, and dad, Tommy, got the crowd amped up. A video posted on TikTok shows Lesli standing side-stage and waving her arms back and forth as the crowd chants the words “Morgan! Morgan!” out loud. Lesli is all smiles while she prepares the audience for Wallen to step out on stage and sing his impressive catalog of hits.

Morgan’s mom was so cute getting the crowd pumped! #fypシ #morganwallen #countrythunderbristol

“Morgan’s mom was so cute getting the crowd pumped! #fypシ #morganwallen #countrythunderbristol,” the caption reads underneath the sweet video.

And it seems like TikTik users were making a day out of sharing videos of Wallen’s parents as a second video captures Lesli enthusiastically clapping with concertgoers, who anticipate the 2022 CMA Entertainer of the Year nominee’s arrival.

“Morgan Wallen’s momma hyping the crowd up before her boy goes onstage is the best,” a note reads over the video.

And, of course, Wallen’s dad, Tommy, didn’t forget to show his love for his son. The proud father couldn’t help but sing along to the hitmaker’s songs while watching the show in a cross-legged position. Tommy looks to be catching the concert in a VIP section as he fervently mouths out the lyrics to Wallen’s “The Way I Talk,” from his debut studio album, If I Know Me.

“It sounds a little bit like my daddy / It don’t cuss around my mama / Got some words you’ve never heard / ‘Less you come from down yonder / The man upstairs gets it / So I ain’t tryna fix it / No, I can’t hide it / I don’t fight it, I just roll with it / Oh, kinda slow like the Mississippi rolls / It’s the only way I know / Man, it ain’t my fault / I just live the way I talk,” Wallen sings as his dad sings along right with him, as seen in the TikTok clip above.

If that’s not enough, another video on social media shows Tommy swaying back and forth while singing along to “Wasted On You,” which Wallen wrote with Ryan Vojtesak, ERNEST and Josh Thompson.

♬ Wasted On You – Morgan Wallen

This isn’t the first time Tommy has shown his excitement for Wallen’s music. He previously was captured giving his best vocal performance during “Don’t Think Jesus.”

And along with supporting Wallen from the side stage, the chart-topping artist’s parents have been credited with helping launch their talented sons career. According to a story shared on his official website, when he was just getting started, Wallen’s mom and dad helped provide him with a stage to hone his craft.

“I don’t know if I ever wrote a song til I was 19 or 20,” Wallen says. “I used to write poems and stuff like that whenI was in school… but really, I started singing when I was three years old. My momma threw me up on stage at church where my dad was a preacher at, and I’ve been singing ever since.”

“I guess I always knew I’d be singing. I always felt a connection to singing. I didn’t know if I could write songs or not. I started doing that in my parent’s garage on the workout weight bench,” he added. “I’d write a song then go in while my momma was cookin’ dinner or something and play it for her. I gotta give my mom credit, she didn’t always tell me I was good, which I appreciated.”

Wallen’s The Dangerous Tour aptly named after his current Dangerous: The Double Album is scheduled to wrap on Saturday (Oct. 8) at Globe Life Field in Arlington, Texas, which will also mark Wallen’s first-ever headlining Stadium concert.