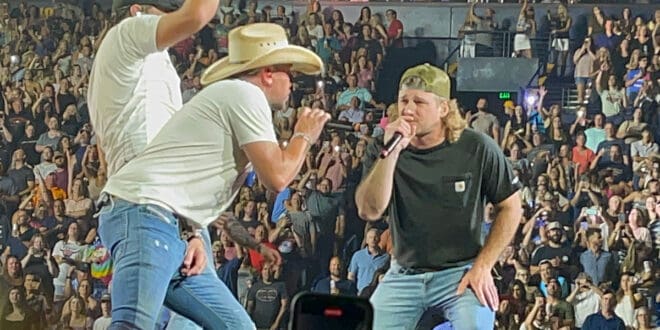 Following two star-studded collaborations that included “This Is How We Roll” with Bryan and Hubbard, “The Only Way I Know” with Aldean, Hubbard and Bryan, the country superstars graciously welcomed Wallen to the stage for a two-song performance that included his chart-topping hits “More Than My Hometown” and “Whiskey Glasses.”

Wallen entered the stage to a thunderous applause that shook the arena and lasted for a few minutes as fans showcased their excitement at the sight of the “Sand In My Boots” singer.

As Wallen took the stage, Hubbard, Aldean and Bryan embraced him with open arms as Aldean proclaimed, “Only in Nashville.”

Hubbard, Aldean and Bryan cheered Wallen on while sitting atop Two Lane branded coolers during his performance of “More Than My Hometown.” Bryan later assisted Wallen by starting the open verse to Wallen’s No .1 hit “Whiskey Glasses,” which immediately prompted a massive sing-a-long.

Wallen was originally slated to appear as direct support on Bryan’s Proud To Be Right Here Right Here Tour, however he removed himself from the tour after a controversial video of him using a racial slur surfaced online.

His appearance comes just one week after his buzzed-about Good Morning America interview.