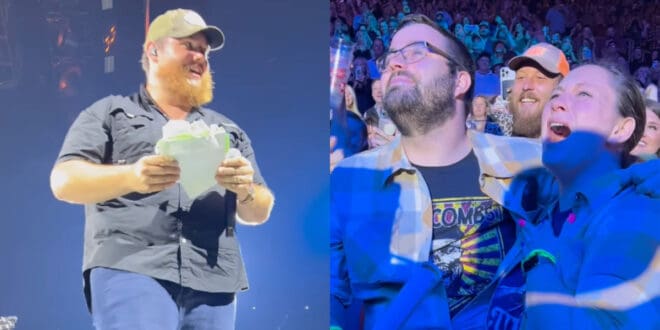 Luke Combs just touched thousands of hearts! The reigning CMA Entertainer of the Year briefly paused his set list at the KFC Yum! Center, in Louisville, Kentucky, on Saturday (Oct. 22) night to assist one expecting couple in finding out the gender of their future baby.

Leading up to the unforgettable reveal, the North Carolina native was interacting with the crowd and spotted a pair of lovebirds in the audience dressed in matching plaid shirts.

Taking an envelope from the couple, he was tasked with revealing whether the couple’s child-to-be would be a boy or a girl. Before sharing the results, Combs got the members of his band involved.

“Bob, what do you think it is?” Combs asks one of his tourmates, as seen in a video shared on his Instagram page.

“I think we’re gonna go [with] boy,” the guitarist responds, as delicate piano plays on in the background.

Meanwhile, another musician named Dustin opts to go with the opposite choice, mouthing out the words, “I think it’s going to be a girl.”

Combs then makes his way back to the couple to find out whether or not they have other children. Upon asking them, “Is this your first kid?” Combs learns he would be dropping the kind of news the couple has never experienced before.

The crowd’s anticipation grows as Combs – admitting he is nervous – tells the couple, “You’ll be having your first son.”

After announcing the news, the entire arena erupts into epic cheers while the soon-to-be parents share a hug and emotionally break down into tears of joy.

“This was a first… Congrats y’all!” Combs captioned the touching post on social media.

Combs’ participation in the couple’s gender-reveal likely made for an extra special moment since he just became a first-time father himself. The hitmaker and his wife, Nicole Hocking Combs, welcomed their first child, a son named Tex Lawrence Combs, into the world on Father’s Day 2022.

“Welp. He decided that Father’s Day would be a good time to show up. I couldn’t agree more,” Combs shared at the time, alongside a picture of the family of three. “Me and @nicolejcombs are over the moon in love with this little guy. Mama and baby are healthy, and we’re back home now with family. Life is good. Everyone welcome Tex Lawrence Combs to the world!”

And Combs previously shared that his life has completely changed since becoming a newfound dad.

“It’s totally different. Your life just completely changes. People say that all the time, and it probably sounds like the most cliché thing in the entire world, but it’s really true. It’s just really like, instantly. Everything’s completely different,” he told CMT. “I’m just not bothered about being, like, you know, covered in someone else’s bodily fluids. Like, I was really worried about that. It’s kind of one of these things where there’s no easing into this. You know what I mean?”

Babies aside, Combs recently celebrated the success of his latest single, “Going, Going, Gone,” which was the most added song on Country radio this week with 81 adds. The track, which follows Combs’ 14th career chart-topper, “The Kind Of Love We Make,” was written with Ray Fulcher and James McNair and appears on his new album, Growin’ Up. Combs also recently sold out 37 of the 39 dates for his upcoming massive World Tour, which kicks off in Arlington, TX, in the spring of 2023.