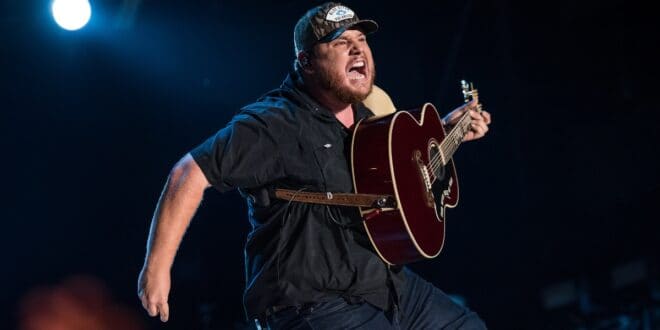 Country megastar Luke Combs is an unstoppable force in the industry as he immediately sells out 37 of the 39 dates for his massive World Tour, including all 16 North American dates and the four newly added shows in London, Melbourne, Sydney and Brisbane!

Comb’s World Tour is one of the quickest selling arena tours ever in the UK by a country artist, and the singer secured the title of the first international performer to sell-out an Australian and New Zealand tour.

Riley Green, Lainey Wilson, Flatland Cavalry and Brent Cobb will serve as support on the North American tour dates, while special guests on the Australian and New Zealand dates include Cody Johnson and Lane Pittman.

Luke Combs World Tour will kick off on March 25 at AT&T Stadium in Arlington, Texas and wrap up in London, England at The O2 Arena on October 19.

Comb’s tour success is just the latest milestone for the chart topper. He recently secured his 14th consecutive #1 with track “The Kind of Love We Make” from his newest record Growin’ Up. The song also reached the #8 spot on Billboard Hot 100’s all-genre chart.

The “Beer Never Broke My Heart” singer is nominated for three 2022 CMA Awards, including Entertainer of the Year, Male Vocalist of the Year and Album of the Year for Growin’ Up. His newest project follows the 3x Platinum What You See is What You Get 2019 album and 4x Platinum This One’s For You debut.

Combs also took to social media recently to announce his return to country radio with “Going, Going, Gone,” a fan-favorite from the new album.

“Excited to let y’all know ‘Going, Going, Gone’ will be my next single on country radio,” Combs shared alongside a video of him performing the song.

Excited to let y’all know “Going, Going, Gone” will be my next single on country radio! pic.twitter.com/EPfz2V2OYA

“Going, Going, Gone” was a standout track upon the release of Growin’ Up in June. Combs co-wrote the song alongside James McNair and Ray Fulcher.

The North Carolina native recently reflected on writing the song and revealed that he had the title saved in his phone for a “really, really long time.”

“We’re sitting there, we’re trying to figure out what we’re going to write. And we had decided we were going to write ‘Going, Going, Gone.’ And as we sat there trying to come up with stuff, I was just playing this riff and the riff really became the focal point of the song for me. I’ve always loved Tracy Chapman’s ‘Fast Car’ and no way is this song even close to as good as that one. But I’ve always loved how that riff immediately, you know, the second it gets played, you know what song it is, and you love it. And I think I wanted to try to kind of, you know, create something that was my own version of that,” Combs explained.

This song marked a first for Combs, who played guitar on the record.

“This is my first time playing guitar on an album. I was super nervous to do that. Somehow I got it done,” he laughed.

The final product became one of Combs’ “favorite songs” on the project.

Previous Kenny Chesney “Can’t Wait To Dig In & Talk About All These Songs” During CRS 2023’s ‘The Artist Interview’
Next Luke Bryan Meets Post Malone After Attending His Nashville Concert: “What A Show. Totally Blew My Mind”