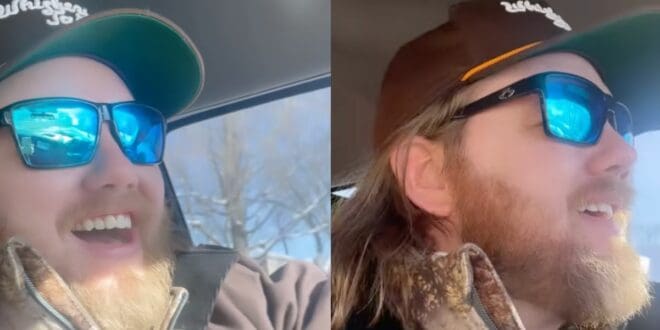 WATCH: ERNEST Is All Smiles As He Reacts To Hearing “Flower Shops” On The Radio For The First Time

ERNEST will never forget hearing himself on the radio for the first-time!

The singer, who is no stranger to hearing songs that he co-penned for other artists flood radio stations across the globe, heard his “Flower Shops” duet on the airwaves for the first-time while driving around in Tennessee.

While the track is set to impact country radio in just a few weeks, with an impact date of January 24, however it seems some stations have already began adding the song into rotation, including Nashville’s 103.3 WKDF, and it just so happens that “Flower Shops” came on the Nashville radio station as ERNEST was driving around in his car.

Upon hearing the tune coming through his car’s speakers, the 2022 Music Mayhem Artist To Watch was overcome with joy and sheer excitement as it marked his first time ever hearing himself on the radio.

Luckily, the fast rising star captured the unforgettable moment on video and shared it with fans, captioned, “crazy.”

“First time hearing myself on the radio,” the text overlaying the clip reads.

The video, shared by ERNEST, finds the singer/songwriter all smiles as he listens and sings along with the track. During the clip, he also says, “Hello Radio” and “Let’s GO!”

“You ERNd it,” Denning said using a pun on the singer’s name, while Houser added, “Congrats my brother!!”

Produced by Joey Moi & co-written by ERNEST alongside Benny Burgess and Mark Holman, “Flower Shops” finds the fast rising singer and his longtime friend and collaborator Morgan Wallen trading verses and choruses before joining together for the track’s final chorus.

“Mister I’ll take your roses / If you cut off the thorns / She can’t take no more / I’ll buy violets and daisies / To hide all the crazy / It’s gonna take all you’ve got / Awe It’s a bad day for love / But a good day for flower shops,” ERNEST and Wallen sing during the chorus.

“Flower Shops” is a song that the Big Loud labelmates have been teasing since late July, which is destined to quickly become a chart-topping hit on Country Radio as since its release the track has already earned critical praise and over 2.5 million streams.

“’Flower Shops’ is a song that isn’t over-written or over-complicated,“ ERNEST shared of the track in a press release. “It’s a sad song with a wink; an honest song about messing up a good thing and running out of sorrys. I wrote it with Ben Burgess and Mark Holman after being on a George Jones/sad Country song kick.”

ERNEST continued, “I didn’t have a hard time going there because I know damn well what it’s like to run out of apologies, and though flowers aren’t ever going to fix it, it’s just about all you can do sometimes. It’s one of my favorite songs, if not my favorite song, I’ve written to date. The response on social media and from fans has been incredible, especially for being an unreleased song up until now. I’m excited for it to be out in the world and even more excited to have one of my best friends, Morgan, hop on it and sing it with me. I am a big believer in Country music remaining honest, regardless of sonics. And this is as honest as it can get.”