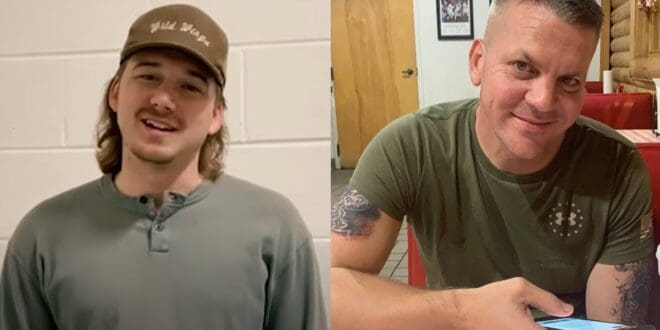 Morgan Wallen’s Dangerous Tour is one of the hottest tickets of 2022. With nearly every show selling out in a matter of minutes, tickets are difficult to obtain. However, Tim Green, a veteran and father of 16, was lucky enough to score a ticket for his teenage daughter as a Christmas gift.

While he made his daughter’s Christmas wish come true, Tim, who is also a big fan of Wallen, was unfortunately unable to secure himself a ticket. That all changed when the country superstar caught wind of the situation on TikTok and surprised Tim with his very own ticket.

A one-minute video, shared by the family on TikTok, captures the moment Tim surprised his daughter on Christmas day.

“When Dad sacrificed getting Morgan Wallen Tickets and got his daughter them instead,” the video caption read.

The clip, sound tracked by Wallen’s chart-topping hit “Chasin’ You,” goes on to show the couple’s 19-year-old daughter, Morgan, tear up as she opens the Christmas gift.

“However, Morgan Wallen if you have an extra ticket, we have a dad to 16 that deserves it,” the text on the video read.

The family went on to encourage fans to tag the country singer in the comments of the viral clip, with hopes to catch his attention: “You guys tag Morgan Wallen for us. He truly has huge fans in this house.”

The video has now amassed over 1.3 million views, and on Friday (Jan. 7), after thousands of Wallen’s fans flooded the comments to tag the East Tennessee native, the TikTok post finally caught the attention of the “Flower Shops” singer.

“Tell dad he’s coming too,” Wallen commented on the clip. “I’ll make sure we get in touch with y’all!!”

After the family saw Wallen’s comment, they quickly replied, “Oh my Gosh, Thank You so much. Also Thank You to all your AMAZING FANS on here. 🥰❤️❤️”

Following the heartfelt gesture from Wallen, the family took to Instagram to praise Wallen for his kindness.

“Excuse us while our family is on Cloud nine over here…” the caption reads. “Thank You, @morganwallen, for being the Amazing Artist and Human Being That you are. ❤️”

The family also shared a clip of Tim singing karaoke to Wallen’s chart-climbing single, “Sand In My Boots,” showcasing their appreciation for the singer’s music.

A member of Wallen’s team at Big Loud has already reached out to the family to coordinate the ticket.

The act of adoption is near and dear to Wallen as his mother, Lesli, and father, Tommy, adopted a young girl named Lacey with the help of Omni Visions in Knoxville, Tennessee in July 2021.

“Today was adoption day! I never imagined what God had in store for us as we started down this road in foster care,” Lesli explained at the time. “I always wanted more children, God decided to wait until now! We thank him for his blessing on our family and for tying our hearts with hers. We love her dearly. I am not posting her face for obvious reason for a while.”

“You guys are special people!! Thankful for you,” Wallen praised his parents in the comment section.

After witnessing his parents adopt his sister Lacey, and watching her growth and confidence flourish, the country hitmaker was inspired to launch the More Than My Hometown Foundation to assist underprivileged children.

“Since my parents fostered and now officially adopted my sister Lacy, I’ve witnessed what love and care can do for a child that didn’t have it before. She has transformed into a confident, trusting and happy kid,” Wallen said in a statement on the foundation’s website. “There are many elements that aid in the development and protection of an adolescents’ life, and that is why I created the foundation, so a child’s resources are not limited due to their circumstances.”

The More Than My Hometown Foundation is named after his fourth consecutive No. 1 single of the same name, from his record-breaking sophomore project, Dangerous: The Double Album.

The foundation “believes every young person deserves the best chance at a great life, by strengthening and fostering these four pillars: FAMILY, COMMUNITY, GUIDANCE, and LOVE – we open the door for greater opportunity and hope,” according to its website.

Established by Wallen in 2021, the More Than My Hometown Foundation promises to help young people to find families that can provide warm, loving homes to “rebuild their confidence, self-belief, and to feel forever loved, with a forever family.”

Fans who wish to donate to Wallen’s More Than My Hometown Foundation to help children in need, can click HERE.

Previous Chase Matthew Holds Back Tears In Video To Fans: “I Feel Like The Kid Whose Dreams Finally Came True”
Next See Adorable Photos Of Kane Brown’s Daughters Kingsley & Kodi Together For The First Time