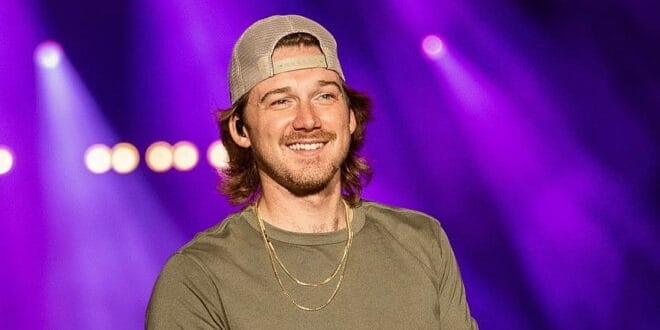 Morgan Wallen Says “It’s An Honor” To Be Nominated For CMA Entertainer Of The Year, Credits Fans For His Success

Morgan Wallen is currently in the running for the highly sought-after 2022 CMA Entertainer of the Year award.

The country music superstar recently co-hosted The Country Countdown USA, where he opened up about various topics, including his nomination for the highest honor at Country Music’s Biggest Night. Speaking with host Lon Helton, Wallen said he gives credit to his fans for getting him recognized as an artist in the prestigious category.

“Man. It’s an honor. I think that award speaks more to my fans than it does speak to me. You know?” Wallen began. “If I wasn’t selling the tickets and If we weren’t doing all these things, then it wouldn’t be a thing.”

“It doesn’t matter how much I go and give my all every single night. I’m going to do that regardless. There ain’t one night where I don’t give it everything I got. But, it wouldn’t matter if there weren’t people there,” he added. “So I think it speaks more to them than it does to me.”

In regards to selling tickets, Wallen was likely referring to his massive headlining tour, the Dangerous tour, which launched in February in support of his record-breaking Dangerous: The Double Album. The trek saw him breaking records in attendance and ticket sales. The East Tennessee native sold a total of 839,704 tickets while on tour and set an attendance record at his final tour stop at the Globe Life Field in Arlington, TX, edging out acts Elton John and Lady Gaga.

Of his last concert on the trek, which was his first headlining stadium show, Wallen says, “It’s always cool having your first time headlining a stadium. I know we’ve played them before, but this was ours. There was just really cool energy the entire time. I was just smiling the whole time, and the fans were amazing…. There was just a great energy overall in there, man. So I hope that’s going to be like that next year too.”

Wallen’s Entertainer of the Year nod has him going up against heavy hitters, including Carrie Underwood, Chris Stapleton, Luke Combs, and Miranda Lambert. Last year, the trophy went out to Combs, who enjoyed his first EOTY win. Before that, Eric Church was the recipient. Garth Brooks, meanwhile, has won the most EOTY wins overall, with seven trophies to his case.

For those who don’t know. The Entertainer of the Year award, according to the Country Music Association (CMA), is given out to an artist who displays “the greatest competence in all aspects of the entertainment field.” Voter consideration includes “recorded performance, in-person performance, public acceptance, leadership, and overall contribution to country music.”

Wallen’s EOTY nomination – his first to date – comes after he spent much of 2021-2022, apologizing for using a racial slur, which was caught on camera in 2021. Due to his choice of words, last year CMA organizers barred him from attending the awards ceremony. He was also ineligible to receive nominations for individual artist categories. However, he was allowed to compete in categories where the achievements of his collaborators, songwriters, and producers would also be recognized. His Dangerous: The Double Album earned a nomination for Album of the Year, which ended up going to Chris Stapleton’s Starting Over.

Since coming under fire last year, Wallen has worked on educating himself and has pledged $500,000 in donations to Black-led organizations.

Wallen has since gone on to reclaim his status as one of the biggest stars in country music.

Along with EOTY, Wallen is also up for the CMA Male Vocalist Of The Year alongside Combs, Church, Stapleton, and Cody Johnson. During the show, he is also slated to perform his fastest-rising single, “You Proof,” which earned him his 7th career No. 1 on country radio.