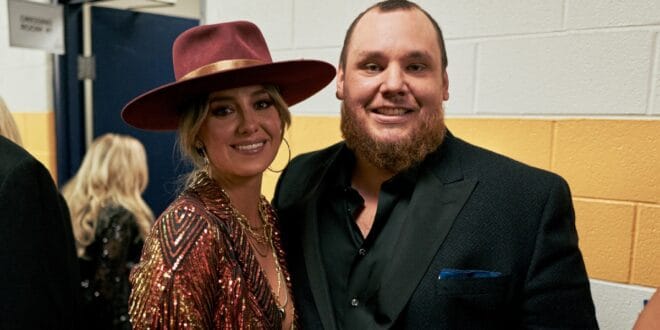 Reigning CMA Female Vocalist of the Year Lainey Wilson has been on the road with Luke Combs during his The Middle of Somewhere Tour this fall and will be joining him again in 2023 for his stadium world tour, but the two have actually known each other for more than eight years.

The “Heart Like a Truck” singer revealed to Music Mayhem that she is planning to write more with Combs and possibly revisit a song they wrote together back in 2014.

“I actually ran across something the other day,” she shared. “[Combs] and I were writing a duet and we’ve actually talked about trying to get back together to finish it and maybe rewrite it. I think both of us have gotten a lot better since then,” Wilson laughed. “So I know him and I are planning on writing more together. It’s just been so crazy the last few years, both of us doing our own thing and I’m just, I’m so proud of him.”

Wilson recently shared a throwback photo with Combs on Instagram, saying, “Damn we’ve come a long way @lukecombs… time has done us well. Congrats on kickin off your tour tonight! Can’t wait to meet ya out there in less than a month and join for the stadium world tour in the spring and summer. Y’all grab your tickets! #middleofsomewheretour #lukecombsworldtour”

On Today’s Country Radio with Kelleigh Bannen, Wilson reminisced about meeting Combs and how much has changed since then.

“First of all, [it’s] full circle. I met Luke at Tin Roof Revival, on Demonbreun, back in 2014,” Wilson explained. “He used to come over to my camper and eat my snacks and cold drinks, So I’m glad he remembered. It’s just so crazy to think about how far he has come, in really a short amount of time… And his fans are the best fans in the world, and they’re just good, blue collar people who take pride in what they do, who work their fingers to the bone, who spend their hard-earned money to come to a Luke Comb show, and I am so glad that he is introducing me to them.”

In addition to new music and touring, Wilson also appears as “Abby” on season 5 of the smash hit series Yellowstone.

Throughout season 5 of the widely popular American neo-Western drama series, Wilson will perform original music from her latest album, Bell Bottom Country. In fact, during the most recent episode of Yellowstone, which aired on Sunday (Nov. 20), Wilson debuted a brand-new tune called “Smell Like Smoke.”

The Louisiana native is grateful for the chance to portray a character that was created specifically for her by the show’s creator, Oscar and Emmy winner Taylor Sheridan.

“I’ve been a fan of this show for years and just to have this opportunity is huge. I don’t take it lightly. Taylor Sheridan has just been so good to me, not just by putting a few of my songs in the show, but he literally called me in February and said, I wanna create a role specifically for you and all you need to do is just be yourself and sing your song and wear your bell bottoms.”

Additionally, Wilson’s first headlining tour, the Country with a Flare Tour, will begin on January 4, 2023, in Spokane, WA, hitting 27-cities with stops at Irving Plaza in New York City and Brooklyn Bowl in Nashville, before concluding in Columbus, OH on March 31st. Joining her on tour will be newcomer Ben Chapman as well as Meg McRee and Leah Blevins on select dates.

Previous WATCH: Toby Keith Crashes Tim And Taylor’s Pop-Up Concert At Hotel Bar In Oklahoma, Performs For 30-Minutes
Next Chapel Hart Mourn The Loss Of Their Beloved Grandmother Beatrice: “Our Worlds Will Never Be The Same”