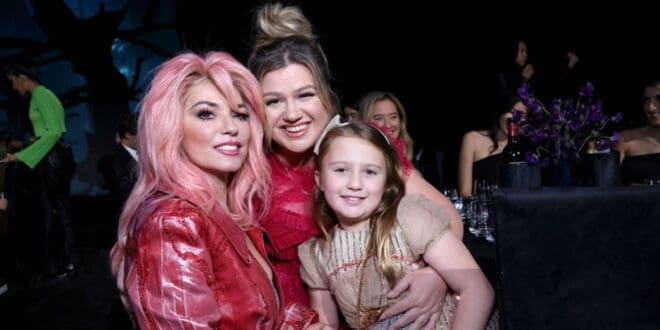 Kelly Clarkson had a big night when she attended the 2022 People’s Choice Awards on Tuesday (Dec. 6) evening. The pop superstar and original American Idol turned talk-show host met one of her heroes – Shania Twain.

Twain had the biggest honor going into the celebratory evening as she was the recipient of the coveted Music Icon Award. The five-time Grammy Award-winning artist and top-selling female country/pop artist of all time also performed a medley of some of her biggest songs during the special broadcast.

Nabbing a moment, Clarkson posed for pictures with Twain while inside the Barker Hanger in Santa Monica, Calif. Posing side by side, the two artists looked fashionable in their red-colored outfits with Twain wearing a jacket dress and pink hair and Clarkson donning a high bun and a gown featuring ruffled feathers.

Clarkson didn’t fly solo for the event, though. She turned the occasion into a mother/daughter date, bringing along her 8-year-old daughter River Rose, who also posed for pictures with Twain and her famous momma.

Rose also shared a picture with her mom and actress Mariska Hargitay, who took home the People’s Choice Award for Drama TV Star for her 2022 role in Law & Order: Special Victims Unit.

But posing for snapshots wasn’t the only reason Clarkson attended the ceremony. The hitmaker won the award for Daytime Talk Show of 2022 for her insanely popular and uplifting program, The Kelly Clarkson Show.

Welcomed to the stage by Ana Gasteyer and Niecy Nash, Clarkson made sure to hug her daughter before accepting her trophy. She also delivered a special message to her baby girl and her son, Remington Alexander, 6, who is currently recovering at home due to illness.

“I’m having a date night with my daughter,” Clarkson said, referencing Rose in her acceptance speech, after being handed her well-deserved trophy. “And Remi, I know you are at home, you’re not feeling well, but we love you…”

“This is really cool to get because this is where the people vote and I feel like for the last 20 years—well that is my whole career—has been people literally voting me in,” Clarkson continued. “This is very important to me because this is why I have an entire career because you all have been supporting me that long. So whether it’s singing or a talk show or whatever I’m doing, I appreciate it.”

Along with thanking the fans, Clarkson also expressed her gratitude for the crew, who have worked tirelessly to bring her talk show to life for viewers all over the country.

Clarkson shares her two children with her ex-husband Brandon Blackstock. Lucky for fans, her award-winning show has been picked up for another season. As reported by E! News, The Kelly Clarkson Show will at least run through 2025.