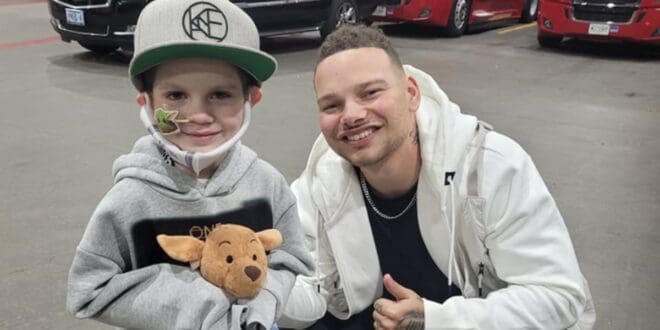 After recently beating an aggressive form of brain cancer, 5-year-old Bryson Schuh received the surprise of a lifetime when he was told he would be attending a concert for his favorite country artist, Kane Brown. And the show wasn’t even the best part of his night.

In February of 2021, Bryson was diagnosed with Atypical teratoid rhabdoid tumors (ATRT) and had to undergo recovery brain surgery. Luckily, this month he received the exciting news that his MRI results show that he is currently cancer free. Bryson’s mom, Janna, started a Facebook page last year to document her son’s journey through this tough time. She has posted many updates on this blog and on other social media platforms, which included a GoFundMe page and as a result, has received support from over 600 followers so far.

In an attempt to help make her son’s wish come true, she posted a video of him saying, “I want to meet you,” adding the words “Kane Brown’s #1 fan kicked brain cancer’s butt and wants to meet him while he’s at his concert January 27th. Let’s make this happen for him.” After sharing the clip, fans rallied behind Bryson to try to get Brown’s attention through social media by tagging him and his team and sharing Bryson’s story.

Following the great news about his health, Bryson’s wish to go to Brown’s concert was also granted, thanks to the Make-A-Wish Foundation. This week he attended the Blessed & Free tour with his mom and dad at the MODA Center in Portland, OR.

When the day finally came, Janna went live on social media several times, sharing performances of the night and their exciting journey to see Brown. Bryson was decked out in his Kane Brown ‘One Mississippi’ sweatshirt and KB branded hat when he met the country hitmaker and his opening act, Restless Road.

“Kane has seen [Bryson] on Facebook but has zero clue he was there,” Janna told Music Mayhem. “I saw the guys from Restless Road getting on their bus and explained who Bryson was and told him he was devastated that he didn’t get to meet [Kane] so one of them got Kane off his [tour] bus for me. I told them it is my son that just beat brain cancer’s dream and Kane got off and hung out with him for 10 minutes and did pictures and signed his sign I made. He said he has seen Bryson on Facebook and was going to reach out to me but forgot.”

During their surprise meet and greet, Brown and Bryson got the chance to talk about their sneakers, video games they play, and they also exchanged a high-five. Brown even signed Bryson’s poster that read, “Kane Brown’s #1 fan kicked brain cancer’s butt!!”

“It was destiny” Brown said when he learned Bryson had chosen this show for his Make-A-Wish.

Janna also told Music Mayhem that Bryson idolizes Brown and that his favorite Kane Brown songs are “One Mississippi”, “Blessed And Free” and “Like A Rodeo.” After the exciting night, Janna shared photos of the singer and her son from their time near the buses on the loading dock.