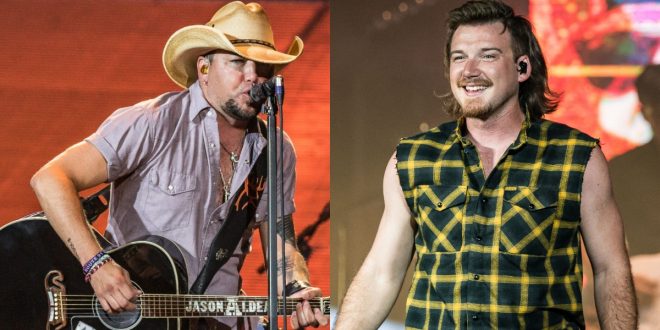 Jason Aldean Releases “Whiskey Me Away,” A Song Co-Written By Morgan Wallen [LISTEN]

Nearly a month after the release of Macon, Jason Aldean is giving fans a taste of what’s to come on the second half of his double album, Macon, Georgia.

On Friday (Dec. 3), the country superstar shared a brand-new song from Georgia called “Whiskey Me Away,” a track that was co-written by Aldean’s longtime friend, Morgan Wallen, alongside Rodney Clawson, Jeff Hyde and Driver Williams.

“Whiskey Me Away” is a story song that finds Aldean crooning over an unpredicted, newfound love. Though they just met, the superstar finds himself head over heels and as they get to know each other over drinks, he declares, “I’m liking where we’re headed now.”

Listen to the new track below.

The song marks the first track off the second half of Aldean’s double album. Georgia will feature 15 new tracks and is set for release on April 22, 2022.

Aldean’s tenth studio album is named after his hometown of Macon, Georgia.

“Where you were raised has such a big influence on who you become and for me it’s no different … especially from a music standpoint,” Aldean remarked in an earlier press statement. “My little hometown of Macon was heavily instrumental in my musical background. Growing up in an environment that was a crossroads between Country music, Southern rock, blues and R&B, it was just natural to blend different sounds in my own way.”

Wallen and Aldean have been friends for quite some time now. Wallen co-wrote Aldean’s 2018 hit “You Make It Easy,” which appear on the superstar’s Rearview Town album.

Following the controversy surrounding Wallen’s use of the n-word, Aldean shared his support for the singer/songwriter during an interview on the Just Being Ernest podcast.

“To me, I think he’s one of the most talented guys that has come through this town in a long time just from a writer’s standpoint, a singing standpoint,” Aldean said. “He was out on tour with me last year and to me and I even told Morgan this when he was out with us, I was like man, you’re the next superstar of our business, man. I mean you could just tell, he just kind of had that thing. I love his voice, I love the songs he’s cutting, I love his vibe, he’s got his own little thing that’s him that’s nobody else, and I think to me that’s what being a star is. He’s the guy that I’ve been the most excited about in this town for a long time.”

In late July, Wallen and Aldean shared the stage alongside Luke Bryan and Tyler Hubbard for a surprise performance of “She’s Country” at Bridgestone Arena.

Months later, Wallen shared a snippet of a brand-new song on Instagram, and it details a night in Downtown Nashville with a girl he met at “Aldeans,” a SoBro bar owned by Aldean.

Wallen frequents the four-level Jason Aldean’s Kitchen + Rooftop Bar and even surprised fans with a performance of “Sand In My Boots” and “Wasted On You” at the popular Nashville hangout in June.