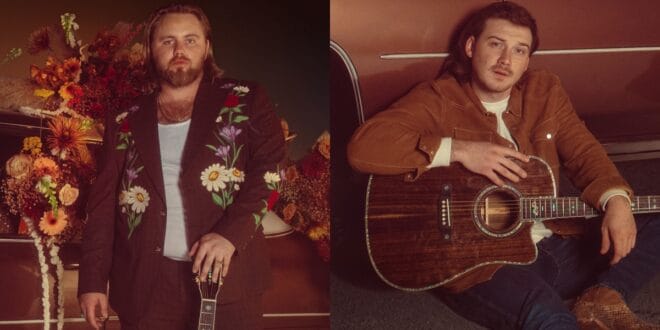 After months of teasing fans and performing the song live, ERNEST and Morgan Wallen have officially released their highly-anticipated “Flower Shops” duet on Friday (Dec. 31) and it was actually written with inspiration from a George Jones’ song.

During a recent episode of the Just Being ERNEST podcast – Jelly Roll and the “Cheers” singer discussed the story behind the new single and how it was inspired by a Jones’ melody.

“He goes, ‘I recorded this song, sent it to Willie Nelson for him to listen to, and Willie sent me back a brand-new version. The only thing that stayed on it was my vocal. So, I got this demo, and it’s called “Whiskey And Water,”’ shared ERNEST to his loyal listeners and Jelly Roll about his conversation with Daly.

According to ERNEST, the athlete turned musician continued to explain the unique collaboration and how he would breathe into the microphone as Nelson tackled the second verse and played an extraordinary guitar solo.

The track featuring Daly and Nelson resonated with ERNEST and forced him to dabble in old-world country music. “I went back and started listening to a bunch of George Jones’ [songs],” shared the breakout star. Alongside co-writers Ben Burgess and Mark Hollman, ERNEST enjoyed a well-rounded George Jones playlist.

“I was playing a bunch of George Jones’ songs, and there was one song I never heard called ‘A Good Year For The Roses,’ which the artist revealed about a critically acclaimed tune that speaks on making small talk. “So, Burgess was like, ‘man, this is pretty cool! We should write something kind of like his. We went back and forth and finally landed on “Good Day For Flower Shops.”

After putting pen to paper, together they came up with a heart-wrenching storyline about someone becoming their own worst enemy within a relationship and how they tend to mess up each and every time. However, throughout the track, they utilize the power of fresh flowers to make up for their constant mistakes.

“The concept is. Basically, I f**ked up my relationship so much, and I continue to do it every time that my only way to fix this is… I’m going to buy every f**king flower in a flower shop. It’s all I got, and I don’t have anything else to give you other than every flower I can buy,” he added.

The song, which is destined to quickly become a chart-topping hit on Country Radio, was released on New Year’s Eve with a music video to accompany the track.

Produced by Joey Moi & co-written by ERNEST alongside Benny Burgess and Mark Holman, “Flower Shops” finds the fast-rising singer and Wallen trading verses and choruses before joining together for the track’s final chorus.

“Mister I’ll take your roses / If you cut off the thorns / She can’t take no more / I’ll buy violets and daisies / To hide all the crazy / It’s gonna take all you’ve got / Awe It’s a bad day for love / But a good day for flower shops,” ERNEST and Wallen sing during the chorus.

In addition to sharing the new song, the singers dropped the music video for the track, which features both ERNEST and Wallen performing the song, with minimal production, while leaning on a flower-covered car, truly allowing the song’s lyrics to shine vibrantly. Watch the clip above.

Wallen and Ernest are entering 2022 in full force by introducing their fan base to a whole new sound. The best buddies returned to their traditional country roots with their old-school sound, which is perfectly displayed throughout the new track.

“Flower Shops” follows Wallen’s latest collaboration “Broadway Girls” with Lil Durk. In the new year, Wallen will be embarking on his nationwide arena tour with his other country friends – HARDY and Larry Feet.